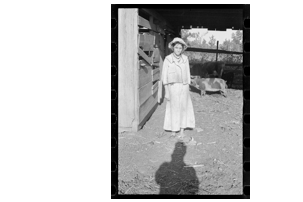 Travel about twenty-five miles south from my house and eighty-seven years back in time and you’d have a shot at encountering one of the twentieth century’s most influential artists taking the picture shown above. In August 1936, Walker Evans traveled to Hale County, Alabama, with writer James Agee to document how poorly tenant-farming families were faring during the Great Depression. A young woman who lived with her parents and siblings near Moundville—folks “not even from a place, just from near a place,” as the bible-selling confidence man describes such a southern backwater in Flannery O’Connor’s short story “Good Country People”—is at the center of the photo.

Many photographers journeyed to the South to portray the hardscrabble lives of poor white southerners in the first decades of the twentieth century, and so it’s not its subject matter that makes this image stand out. Precursors like Lewis Hine had photographed child laborers in the South during the teens and twenties: oyster shuckers in Bayou La Batre, Alabama, mill workers in Gastonia, North Carolina. A host of contemporaries were documenting rural southerners’ struggles for the Farm Security Administration, including Russell Lee, who photographed rickets sufferers in Arkansas and Texas, and Marion Post Wolcott, who captured images of pellagra victims in Alabama and North Carolina. What sets Evans’s snap apart is that it is both a portrait of a young woman and a self-portrait in silhouette of the artist. Shooting outdoors with his back to the sun, Evans cannot help but capture his own shadow.

In Class, Whiteness, and Southern Literature, my book just out from Cambridge, I search for the shadows cast by middle-class makers as they fashioned pictures of poor white southerners across the long twentieth century. Rather than imagining that poor white southerners conceived in the minds of middle-class novelists, short story writers, essayists, memoirists, and visual artists tell us very much about poor white people, I treat these representations as windows onto their creators’ and consumers’ beliefs, biases, and concerns about social class. Concentrating on four different periods of social and economic upheaval—the late-nineteenth-century Gilded Age, the Great Depression of the 1930s, the mid-twentieth-century civil rights era, and the economic boom of the 1990s—my book offers a fresh account of American literary history told through a series of struggles over how the poor white southerner would take shape in the national imaginary. While each era gave rise to a host of writers who treated poor white identity as a foil for middle-class white people’s desired self-presentations, each period also saw a maverick author or two strive to push against such depictions, exerting enough force in the process to reshape the literary movements and genres in which they worked. The book’s chapters probe how Charles Chesnutt, William Faulkner, Flannery O’Connor, Dorothy Allison, and Barbara Robinette Moss swam against the current, pioneering formal innovations with an eye to representing poor white characters in new ways.

About the Author: Jolene Hubbs

Jolene Hubbs is an associate professor of American Studies at the University of Alabama. She studies the literature and culture of the US South....