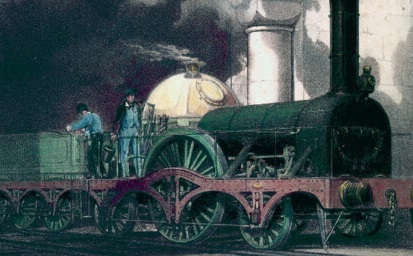 In my book The Old Enemies (CUP) I described 1845 as ‘a year of religious crises’. Later, when looking at broader trends that year, I was surprised by the sustained intensity of crises that also arose in three other areas of national life: Ireland, the ‘Condition of England’ and the railways. Deep concern about each of these areas stimulated the writing of open letters to the newspapers and of hastily prepared pamphlets, many of which took the form of open ‘letters’ addressed to a well known figure, or to a real or fictitious ‘friend’. Equally surprising was the fact that so many names from the Victorian pantheon underwent formative changes in their lives, or significant changes of heart and mind, in 1845. They include Sir Robert Peel, William Ewart Gladstone, Elizabeth Barrett, Robert Browning, Jane Welsh Carlyle, Thomas Carlyle, John Henry Newman and John Ruskin. It was in their private letters that these individuals most vividly articulated and communicated a sense of crisis or transition in their own lives and in the life of the nation. And these letters were exchanged faster than ever before, thanks to a communication revolution effected by the introduction of the universal penny post in 1840 and the expansion of the railway network. By focusing upon private and open letters of 1845, my new book offers a fresh portrait of the early Victorian age.

The Year That Shaped The Victorian Age: Lives, Loves and Letters of 1845 begins with a section on three public scandals. The opening of letters to and from the nationalist exile Giuseppe Mazzini and others was the subject of long and acrimonious debates in the House of Commons. Sir James Graham, the Tory home secretary, knew that he would always be remembered as the man who opened Mazzini’s mail, and also that of Thomas Slingsby Duncombe, the Radical MP who led the attack against him. The emphasis in chapter 1 falls upon private and open letters that feature in or illuminate these debates on covert letter-opening by the Post Office. Two individuals whose views on railway speculators were influential in 1845 play leading roles in chapter 2, which begins with John Thaddeus Delane, editor of The Times, and ends with Charles Dickens and his brief editorship of the Daily News, which was launched in the railway interest. Two kinds of crash associated with the burgeoning railway system dominated the news. First, there were the frequent accidents on the track which terrified passengers, infuriated commentators and inspired eye-witnesses to write letters to the editor of The Times. Secondly, John Leech’s Punch cartoon, ‘The Railway Juggernaut of 1845’, with its widow clutching bags of money by way of tribute to the false god ‘Speculation’, crystallizes a widely shared concern that the railway mania would lead to personal financial catastrophes and a crash in the market. Meanwhile paupers in the Andover workhouse were so malnourished that they gnawed the foul bones which they were set to crush for fertiliser. Public outrage was fuelled by open letters to the press, and much of the evidence presented to subsequent inquiries turned upon official and private letters. In chapter 3 some of the impassioned open letters to The Times on the poor law by the Hon. and Revd Sydney Godolphin Osborne and others are presented as outstanding examples of the kind and as key documents in the history of the ‘Condition of England Question’.

In sharp contrast to these open letters, designed to influence public opinion, the intimate letters examined in Part II are privately addressed to one other person and are expressive of heightened emotion. On 10 January 1845 Robert Browning opened a life-changing correspondence with Elizabeth Barrett that would lead to friendship, then to love and eventually to marriage, on 12 September 1846, and a secret journey to Italy a week later. Chapter 4 considers the relationship between the composition, delivery and receipt of the letters of 1845 and the hopes, delays and frustrations, the self-revelations and emotional transitions which they convey. Ruskin spent seven months of 1845 in Italy, carrying out research in preparation for the second volume of Modern Painters, the book that had already made him famous. The emphasis in chapter 5 is not upon his letters as travel writing or as indices of his intellectual journey, but rather upon their intrinsic qualities as communications between a son and his father which, though written abroad and taking nine or ten days to arrive, sustain the intimacy of a connection between two difficult and complex personalities who have a ‘strong desire to be speaking’ to one another. Viewed bibliographically, Thomas Carlyle’s edition of Oliver Cromwell’s Letters and Speeches serenely take its place in a list of publications by the most influential writer of his age. Viewed biographically, however, the making of this edition contributed to a troubled situation in his domestic life, as revealed in his private correspondence and that of his wife, Jane Welsh Carlyle, famed as a gifted literary hostess and a pre-eminent letter-writer. In chapter 6 we see Carlyle corresponding with individuals who owned Cromwell letters while also writing intimate notes to the society hostess Lady Harriet Baring, at whose shrine he worshipped like a courtly lover. Jane Carlyle shared her agonies of jealousy and confusion with a cousin, and informed John Forster that her husband was ‘too much occupied with the Dead just now to bestow a moment on the Living’.

The established Church of England went through a series of crises in 1845, two of which are the subject of Section III, ‘Oxford Movements’. Chapter 7 considers the clash between the authorities of Oxford University and the Revd William George Ward, whose ‘Romanizing’ ideas were far more radical than those of the founding figures in the Oxford Movement, which was itself highly controversial. The chapter focuses upon the almost daily exchange of private letters between key individuals during the crisis surrounding Ward’s ‘degradation’ (removal of degrees), enabling anxieties to be expressed and church party tactics worked out; and secondly, the hasty writing of pamphlets, often in the form of open letters. Chapter 8 examines John Henry Newman’s private letters to friends and members of his family as he turned his face ‘Romeward’. (He converted in October 1845.) The authoritative voice which had captivated a generation of undergraduates in sermons delivered in the university church, later printed in huge numbers, now faltered, as Newman expressed his deepest anxieties about a move that would convulse his many disciples and threaten the unity of the Church of England.

Section IV considers three sides of the polygon that is ‘the Irish Question’ in early Victorian politics. Peel proposed to increase and make permanent the Protestant state’s grant to St Patrick’s College, Maynooth, near Dublin, for the training of Roman Catholic priests. Heated and prolonged public debate ensued. Gladstone, who was one of Peel’s ministers, had opposed the grant in principle in his first major publication and yet was later to vote for the legislation after his resignation from the cabinet. Chapter 9 charts Gladstone’s tortuous political and spiritual journey, using his private correspondence with his wife, his cabinet colleagues and his fellow high Anglicans. In response to the acute problem of poverty in Ireland, then part of the United Kingdom, The Times sent its own ‘Commissioner’, the English barrister and journalist Thomas Campbell Foster, to report extensively on ‘The Condition of the People of Ireland’ in a long sequence of open letters to the editor. Chapter 10 examines Foster’s eye-witness accounts of poverty and the mismanagement of land, and his running commentary on these subjects. His description of Daniel O’Connell’s own tenantry at Derrynane permanently tarnished the ‘Liberator’s’ name. In the autumn of 1845, as news of a potato blight came in from various parts of Great Britain and Ireland, the prospect of famine in the ‘second island’ began to loom. By December Peel was convinced that his government would have to save Ireland by abolishing the corn laws, that shibboleth of the Tory landed class. Having failed to take his cabinet with him, he stepped aside, only to be reinstated by the queen when Lord John Russell failed to form a Whig ministry. Six months later the corn laws were abolished and the Tories were out of office. Chapter 11 examines the private political letters exchanged between Peel and Sir James Graham, Richard Cobden and John Bright of the Anti-Corn Law League, and other leading players, on the brink of the ‘great hunger’ in Ireland and the eventual resignation of a prime minister.

A short afterword considers parallels between the early Victorian age and our own, the most significant of which is that between the communication revolutions of the 1840s and the turn of the twenty-first century, between the universal penny post and electronic mail. Librarians and curators of the digital age are wrestling with the fact that emails are ephemeral: how will historians of the future access the kind of exchange which I have discussed in my book, exchanges that were transacted through mechanical means and considered to be worth keeping? Ironically, with enforced limitations on travel and access to libraries in 2020-21, owing to the Covid pandemic, the collections of early Victorian holographs that were most accessible to this author have been those that are digitized. A hybrid of mechanical and digital formats beckons in the ‘new normal’ of the near future.

About the Author: Michael Wheeler

Michael Wheeler is a leading cultural and literary historian and presently a Visiting Professor of English Literature at the University of Southampton. His many critically acclaimed books include the prize-winning Death and the Future Life in Victorian Literature and Theology (1990), Ruskin's God (1999), The Old Enemies (2006) and St John and the V...

Poor White Southerners in the...