Small Things in the Eighteenth Century 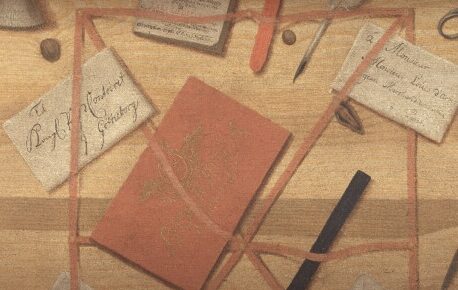 When we first started to think about small things, we found we couldn’t stop. Small things had always been there of course, but it was hard to stop thinking about them once we got started. It was, to be honest, surprising and felt just on the edge of embarrassing, as if we had accepted, somewhere along the way, that academic research should be formed of grand narratives about enormous things. To be concerned with small things, to be obsessed with them even, risked feeling a bit comical, evoking even Henry Fielding’s satirical portrait of Parson Tickletext’s obsessive reading of Pamela: “if I lay the Book down it comes after me.” Small things did come after us and we have no regrets.

For Chloe, it started in 2015, and with bodkins (large needles) and bodkin cases, when she was writing an essay on “Gender and the Material Turn,” for the book Women’s Writing, 1660–1830: Feminisms and Futures (2016). Her fascination with these utilitarian objects, and their intricate, decorative cases, eventually developed into an article on bodkins, material and literary: “Bodkin Aesthetics: Small Things in the Eighteenth Century,” which appeared in the “Material Fictions” issue of Eighteenth-Century Fiction (2019).

For Beth, it started in 2007, while she was working on Women and Things, 1750-1950 for a series of co-edited books on women and material culture, she was researching the Duchess of Portland’s vast shell collection, for what would become The Duchess’s Shells (2014). Writing this book drew her into the wonderful world of natural history collectors, who were obsessed with capturing, possessing, arranging, and displaying small natural objects, such as shells and insects, that held inordinate power over their collectors, compelling them to act in ways that may have seemed irrational to the uninitiated.

Together we started to talk more and more about small things, thinking through theories about their attractiveness and their haptic affordances. In these conversations we came to realize how much scale mattered both to us and to the eighteenth century. Despite being very different from each other (shells and bodkins), our small things shared similar attributes; their appeal was deeply connected to their tiny size. All of which made us wonder if others who were working on material objects that happened to be small had noticed how their small scale shaped the ways in which they functioned socially, culturally, and politically. It turns out, they did.

The aim of this volume is to bring further scholarly attention to small things and how they can convey complex meanings, produce a range of affects in their beholders, and perform tasks in collaboration with their handlers. In chapters that examine the functions and meanings of small things, from the decorative and playful to the useful and performative, our collection illuminates how small things circulated in eighteenth-century life to fulfill a variety of purposes. Small things, such as children’s books, patch boxes, pots, beads, tooth-pick cases, buttons, coins, and medals generated tactile and creative pleasures for users, even as, at times, they could unveil the clumsiness of fingers and limits of the body’s adeptness. Many small things demanded additional scrutiny, nimbleness, and concentration to apprehend and handle. As our contributors show, small things were frequently on the move, sliding into domestic and private spaces with ease, carrying with them messages from the world beyond. Ceramic jugs, snuff boxes, fans, and rings decorated with political imagery brought controversial conversations into the home and tavern. Small things, such as ants, tea boxes, leather wallets, and strands of wampum, were connected with vast geographic distance and embedded in the trade routes of saltwater slavery and empire building in India and North America.

Small things continue to intrigue us. Beth is writing a book about eighteenth-century insect collectors and their fascination with the exquisite beauty and functional elegance of tiny insect bodies while Chloe has finished a book that places scale in conversation with needlework, and other small portable crafts, and their connections to the eighteenth-century Atlantic world

About the Author: Chloe Wigston Smith

Chloe Wigston Smith is the author of Women, Work, and Clothes in the Eighteenth-Century Novel (2013) and co-editor, with Serena Dyer, of Material Literacy in Eighteenth-Century Britain: A Nation of Makers (2020). Her current research, supported by a British Academy fellowship, centers on material culture and the Atlantic world....

About the Author: Beth Fowkes Tobin

Beth Fowkes Tobin, a recipient of NEH and NSF fellowships, is the author of The Duchess's Shells: Natural History Collecting in the Age of Cook's Voyages (2014), Colonizing Nature: The Tropics in British Arts and Letters, 1760–1830 (2005), and Picturing Imperial Power: Colonial Subjects in Eighteenth-Century British Painting (1999)....