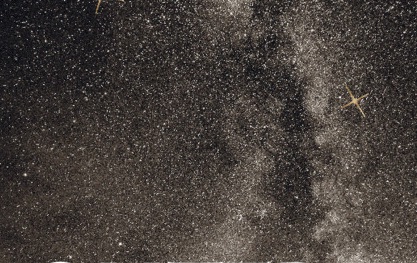 I first had the idea for this anthology right before the 50th anniversary of the moon landing. The 100 Poems series seemed like the perfect way to highlight both the progression of poetry about outer space over time, as well as many well-known and talented poets who have explored the topic in their poems. At that time, renewed support for travel to Mars and ongoing space missions that sent photographs instantly visible to the world via social media kept the subject in the public eye. Since then, the launch of the James Webb Space Telescope in December 2021, private rocket launches, and the current Artemis 1 launch, planned for November of this year, all make Outer Space: 100 Poems even more timely than I’d imagined.

One of the first poems I decided to include in the anthology is an excerpt from Tracey K. Smith’s “My God, It’s Full of Stars,” describing her father’s work on the Hubble telescope.

The first few pictures came back blurred, and I felt ashamed
For all the cheerful engineers, my father and his tribe. The second time,
The optics jibed. We saw to the edge of all there is—

So brutal and alive it seemed to comprehend us back.

When I read that, chills ran down my spine, and I knew I’d found the connection between astronomy and poetry, trying to answer questions about what we are looking for, and how it can feel when we find it. Scientists themselves know this connection, as evidenced by the last poem in the book, written by Charles Simic and included in a July 2021 mission to Jupiter.

I was able to include other poems about modern space travel, such as Gwyneth Lewis’s “Zero Gravity: A Space Requiem,” Dr. Alice Gorman’s “Here Now the Sun: A Poem for Valentina Tereshkova, the First Woman in Space,” and Jay Ruzesky’s “Sergei Krikalev on the Space Station Mir,” all which capture aspects of space travel from the point of view of someone who has actually traveled in space.

But what surprised me was the number of poems written centuries before the moon launch that imagined what space travel might feel like. Lady Mary Chudleigh, in her book The Song of the Three Children, Paraphrase’d, published in 1703, while knowing that “’Tis Thought alone the Distance must explore,” writes

And at one View Ten thousand sparkling Orbs survey,
Innumerable Worlds and dazling Springs of Light.
O the vast Prospect! O the charming Sight!
How full of Wonder, and Delight!
How mean, how little, does our Globe appear!

Around 70 years later, the former slave Phyllis Wheatley, in her poem “On Imagination” envisions leav[ing] the rolling universe behind:

From star to star the mental optics rove,
Measure the skies, and range the realms above.
Then in one view we grasp the mighty whole,
Or with new worlds amaze th’ unbounded soul.

Around the same time, Anna Laetitia Barbauld also imagines traveling in space in “A Summer Evening’s Meditation.” After she passes the moon, Mars, Jupiter, and Saturn, she continues on: “fearless thence / I launch into the trackless deeps of space, / Where, burning round, ten thousand suns appear.”

Throughout the process of selecting poems for the anthology, it struck me again and again how the longing to see and understand what is out there in space has been a theme of poetry across time and cultures for as long as humans have been writing. The fact that we’re now able to explore and travel in space farther and farther means that there are more answers, but also more questions, for us to ponder in poetry.

About the Author: Midge Goldberg

Midge Goldberg has written and published three poetry collections, including, in 2021, To Be Opened After My Death. She was the recipient in 2016 of the Richard Wilbur Poetry Award for her book Snowman's Code, and, in the same year, of the Howard Nemerov Sonnet Award. Her poems have appeared in Measure, The Hopkins Review, The Atlanta Review, Poetr...