What have fish to do with Gothic ivories? 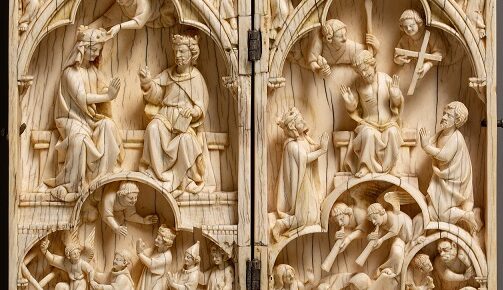 Around 1248, the merchants of Flanders submitted a complaint to the French king Louis IX about the malfeasance of customs agents at the Franco-Flemish border at Bapaumes. Among the specific complaints regarding their overreaching exercise of power is the anecdote of a young man from Bruges who was travelling with 28 headless and tailless herrings, on his way to Soissons. The complaint specifies that he was headed to the Picard city to learn French (!), and his mother had sent him with what was essentially a packed lunch. The customs agents demanded a shocking 14 deniers in duties. The young man had no money whatsoever, but he was willing to forfeit his herrings, for which his mother had bought for only 4 deniers.[1] It seems the customs agents wanted a good lunch.

Such are the anecdotes that ended up on the metaphorical cutting room floor in writing French Gothic Ivories: Material Theologies and the Sculptor’s Craft. Approaching the first monographic consideration of Gothic ivories since 1924 in a radically materially-oriented way, my research led me to consider ivory and its carving within the burgeoning Gothic Emporium, of which the hapless and herring-less young man was but a humble part. From long-distance interregional trade that stretches into sub-Saharan Africa, to the local markets of thirteenth-century Paris; from the inventories of the sumptuous objects of queens and kings, to the cooking accounts of countesses – information gleaned from these sources is woven together with the theological texts that have so long been the mainstay of medieval art history to create a picture of what elephant ivory meant to carvers and buyers, and how it bore meaning and significance to the lives of the users.

The mid-thirteenth-century Flemish complaints to Louis IX, for example, confirmed that already at this early date elephant ivory was travelling along the trade routes from the English channel to the markets of the French Kingdom – linking the importation of elephant ivory in Northern Europe to the heavy sea-traffic that supplied the Flemish textile industry. It also poses the question of why the raw material was being brought to Paris for carving and not being primarily worked in the effervescent merchant cities of Flanders and Hainaut. Already by the 1260s aristocratic accounts underscore again and again that noblemen and women from across the francophone world travelled to Paris to buy luxury goods, including—prominently—works made in ivory. Similar geographic connections lie behind the intellectual and theological reception of ivories: Paris’ position as the leading educational center for clerics enabled social networks among university-educated clergymen and the laywomen and laymen who owned Gothic ivories in the first century of their production (1230–1330). The favored confessor of Jeanne, countess of Flanders, was a Dominican who was trained at the Parisian convent of Saint-Jacques where he was one of the few experts in material exegesis. Jeanne not only precociously owned an ivory Virgin and Child statuette upon her death in 1244, but moreover donated it to the Dominican convent of Lille in commemoration of her dear confessors.

Ivories were as important to the spiritual lives of men of the cloth as they were to prominent laywomen. The chancellor of the University of Paris and then papal legate Eudes de Châteauroux donated an ivory Virgin and Child statuette to reinforce his memorial donation to the Parisian church of Sainte-Geneviève in 1273. Uncovering the deep involvement of intellectual elites in the production and consumption of Gothic ivories allows the major theological and political dramas in which these men were involved to be brought to bear. Infamously, Eudes was a key player in the Talmud trials ordered by Louis IX in the 1240s; the written rhetoric of Eudes echoes many antisemitic overtones observed in some of the most prominent works of Gothic ivories, like the extraordinary Deposition group now reassembled at the Louvre.

The material theology of ivory becomes most salient when we consider the medical uses of elephant tusks in the high middle ages – ivory was a potent component of many medieval remedies, sold in powered form in pharmacies, and ingested to cool overheated internal systems. Ivory, powered or otherwise, had a real effect on bodies as well as souls, following the same mechanisms of effectiveness as calamine, rose, or gum Arabic. As a materia medica, ivory was an active substance that brought real change in the physical world. Re-placing ivory among a constellation of active substances reconceptualizes the power it held within religious settings – and puts forth a historically grounded model of the power of things.

Thinking broadly about the place of imported elephant ivory within the medieval world of goods brings us back to fish. The formidable countess of Artois, Mahaut, understood the power of things to knit together kinship networks – and this includes ivories as much as fish. We know that Mahaut bought, prayed with, gifted, and repaired ivories, and was fond of the most prominent ivory carver of the early fourteenth century, a tabletier called Jehan le Scelleur. Mahaut used Gothic ivories as she did the fresh fish from her extensive grounds at Hesdin – they were displayed, presented and consumed as a manifestation of elite taste and control of luxury resources. Like the robe of honour Mahaut gifted the wife of Jehan le Scelleur, she would send sturgeon or salmon by courier to kin across the realm.[2]

And so, by casting my net broadly, trawling in the vast ocean of documentary sources, in French Gothic Ivories I have brought in a haul of textual witnesses – some long-known, many others new to the field – to contextualize and enliven our understanding of these miniature Gothic carvings made from a material that comes from across the seas.

About the Author: Sarah M. Guérin

Sarah M. Guérin is assistant professor of the history of art at the University of Pennsylvania....

Stuart Sillars on the Visual in...