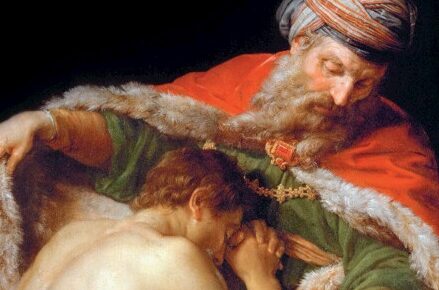 What is the center of the apostle Paul’s message of good news about God? According to this book, it is something God did and continues to do through Jesus Christ. It is divine self-giving for the benefit of humans, and Paul thinks of it as a divine self-sacrifice to be received with reciprocity by humans. Paul’s Epistle to the Romans identifies God’s self-sacrifice through Christ and the reciprocal response expected of humans. Both aspects of Paul’s message, however, have been widely misinterpreted by commentators.

Romans 3:24–25 is well-known for Paul’s perspective on God’s putting forth Christ as a ‘sacrifice of atonement’ (ἱλαστήριον) to promote divine righteousness, but the details are controversial among interpreters. Paul, I suggest, could have said that God punished Christ for human sin, but he does not. In addition, he could have said that Christ’s death is a substitute for humans, but he does not. I propose that we avoid over-interpreting Paul here, while holding on to his clear teaching that Christ’s death is sacrificial on behalf of God for humans for the sake of a righteous relationship. Any doubt about the latter teaching should be removed by Paul’s explicit remark that ‘Christ our Passover has been sacrificed’ (τὸ πάσχα ἡμῶν ἐτύθη; 1 Corinthians 5:7). Paul thinks of this sacrifice as a joint effort of God and Christ, for the sake of human reconciliation to God in a relationship of divine righteousness.

The expected human response to the divine self-sacrifice is a matter of ongoing controversy among interpreters. Romans 12:1–2, according to the book, takes us to the heart of Paul’s understanding of this response, with his injunction ‘to present your bodies as a living sacrifice, holy and acceptable to God, which is your reasonable act of worship.’ He thus recommends a commitment of human reciprocity with God’s self-sacrifice for righteous relationships. This reciprocity towards divine self-sacrifice is not simply human imitation of God or Christ. It stems from an experience of God’s redemptive action towards humans and from their cooperative reliance on that experience for responding in kind.

Righteous self-sacrifice by humans includes obedience in response to God, that is, giving or presenting themselves, including their will, to God in response, against any contrary will. The pertinent sacrifice is thus no mere ritual, external practice, physical suffering, or bodily death. The book proposes Jesus in Gethsemane as a model of righteous self-sacrifice to God, in line with Paul’s focus on Jesus’s self-giving obedience to God in his willing death for God (Philippians 2:8). Paul drew his notion of reparative self-sacrifice from his experience and his understanding of God’s self-giving love in ‘the Son of God, who loved me and gave himself for me [παραδόντος ἑαυτὸν ὑπὲρ ἐμοῦ]’ (Galatians 2:20). The book illuminates this idea of self-sacrifice from Paul’s understanding of divine self-sacrifice in the Jewish scriptures.

The self-sacrificing power of God, according to Paul, enacts and reflects divine righteousness. Stemming from God’s perfect goodness, this righteousness is powerful towards presenting and sustaining divine goodness in the world, including in the redemption of humans. This book explains how, in Paul’s perspective, such righteousness contributes to the reparative redemption of humans in divine–human reconciliation through self-sacrifice. It also clarifies how faith and hope in God, according to Paul, depend on a distinctive kind of reciprocated self-sacrifice. Paul finds a practical pattern in ‘dying with Christ’ into obedient life with God. Such dying includes responsive repentance in turning from an anti-God will to God in cooperative trust and obedience. The book explains how this theme informs Paul’s ethical thinking and his distinctive approach to the law of God and ‘works of the law.’

Two main themes illuminate Paul’s gospel of righteousness, according to the book. The first is a theme from the book of Isaiah according to which divine righteousness includes ‘salvation’ and ‘deliverance’ by God for humans (Isaiah 46:13, 51:5, 6, 8, 61:8), as well as divine vindication of this righteousness (Isaiah 41:2, 61:3, 7. The second is a theme indicating that redemption by God includes divine self-sacrifice and an expected response in kind from humans. The book also suggests, on the basis of Romans 3:25, that Paul understood divine righteousness itself to include self-sacrifice for the sake of redeemed life with God. The role of divine self-sacrifice joined with human reciprocity in Paul’s gospel has been inadequately explained by contemporary interpreters. This book corrects this omission by giving due attention to reparative atonement in Paul, in the light of his Jewish heritage.

Regarding the ‘good news’ in Paul’s message, the book explains how God’s giving up his Son to death in self-sacrifice is God’s righteous way to disable the powers of sin and death and thereby to offer all people reconciled life with God, in God’s kingdom family. Such reconciled life survives the powers of sin and death that hinder lasting divine–human reconciliation. Paul takes sin to involve human obstacles to reconciliation to God, particularly lack of trust and obedience towards God. People on earth still die, according to Paul, but they can die and then survive under the reparative power of the divine self-sacrifice in Christ.

God vindicates Christ and God’s people, in Paul’s message, with a powerful gift of resurrected life that survives sin and death. As a result, people can live under the power of the good news of God, without domination from sin and death. Specifically, they can live with God and others in the righteous freedom of reconciliation intended by God, with a benefit of lasting resurrected life. Paul’s focus on righteous self-sacrifice, then, is for the sake of resurrection life with God, including in present life with God’s family guided by ‘the obedience of faith.’

Some critics suggest that Paul’s good news is little more than a a fairy tale, but the book looks to needed evidential grounding in human experience of God. The relevant experience is morally robust, and its reception is sensitive to the will and values of a person. It is an experience of the self-disclosure of God’s moral character of righteous agapē to humans, including in their conscience. In addition, it aims for human cooperation in righteous self-sacrifice, for the sake of bringing about God’s will among humans. The absence of such cooperation would make divine self-disclosure ineffective relative to that redemptive goal. This reality accounts for how the evidence for Paul’s good news can be hidden at times from some people but experienced by others. It thus bears on the actuality of diverse human responses to his good news.

About the Author: Paul Moser

Paul K. Moser is Professor of Philosophy at Loyola University Chicago. He is the author many books, most recently, The Divine Goodness of Jesus, Understanding Religious Experience (2021)and The God Relationship (2017)....