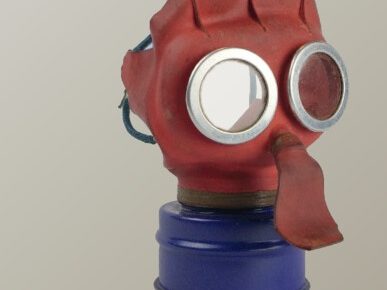 We are living in a global age of masks.  The face coverings that many of us have worn since the emergence of the COVID-19 pandemic range from medical-grade PPE to handsewn cloth to expensive designer-branded fabric. Masks went from being hard to find in the spring of 2020 to nearly ubiquitous two years later.  Some countries gave their citizens and residents masks, some left the acquisition of such protection up to individuals.  But around the world, people suddenly had to think about what to put on their face for their own protection and that of others.  Photographs show face-masked audiences at performances, sporting events, graduations, weddings, funerals, in transit centers and stores, courtrooms and schools.

Such images of ordinary people with faces rendered invisible behind masks harken back to the era between 1915-1945. This earlier period, which has preoccupied me for decades, was the time when war became modern, notably because civilians far removed from traditional battle zones had to confront the harrowing arrival of new weapons of war: air power and chemical arms.  When I learned that one of the reactions to this new threat to domestic life was the mass production and distribution of gas masks to civilians of every age, I wanted to find out what we could learn from this moment when non-combatants became so fully integrated into the waging of modern war. Focusing on the gas mask opened up many ways to do this.

Once I started looking for information on civilian gas masks, I soon found them in nearly every facet of society. There were government plans for civilian protection dating to the 1920s and scientific testing of anti-gas devices on infants and the elderly in the 1930s; manuals for first aid in a chemical war and science fiction that imagined the end of the world in poison and flame; wartime poster campaigns and films of gas raid drills and music-hall songs that made fun of the masks; queries from colonial outposts asking for anti-gas protection for their inhabitants and internal government memoranda calculating the costs of sending gas masks around the globe; heated public debates in newspapers and periodicals; and diary entries and letters from distraught mothers devastated by having to put their children in the anti-gas protective helmet for babies.

All sorts of questions emerged.  What did it mean for the state make this massive investment in trying to keep its population safe from war at home? How did folks feel about having their families, including their babies, fitted for anti-gas protection?  Why did groups like feminists and socialists argue against the distribution of gas masks to civilians? How did carrying a gas mask come to signal a willingness to be a good citizen and support the wartime state?

When I started researching and writing this book, I had no idea that masks would once again become part of our daily lives, and it is hard to imagine how to write a history of our times without them.  For anyone trying to understand the changing stakes of modern, total war, the history of the civilian gas mask reveals that this must include how the state came to understand that it had an obligation to try to keep individuals safe, to protect the body as well as the border. It must also include how individuals responded in unpredictable ways to the call to protect their neighbours while protecting themselves.

About the Author: Susan R. Grayzel

Susan R. Grayzel is Professor of History at Utah State University. Her previous publications include Women's Identities at War: Gender, Motherhood and Politics in Britain and France during the First World War (1999), At Home and under Fire: Air Raids and Culture in Britain from the Great War to the Blitz (2012), and the co-edited volume Gender and ...