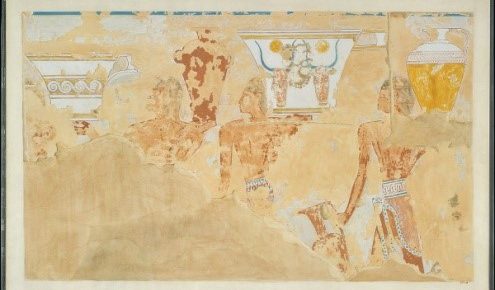 This book, initially published in French as ‘L’art égéen’ (two volumes, Paris 2008-2014), provides a history of the artistic output accompanying the development of Aegean civilisations, from the Neolithic (c.7000 BC) to the end of the Bronze Age (c.1050/1000 BC). During this long period, the Aegean world sees a remarkable development of artistic creations and styles, some of them unique in art history, such as the Cycladic figurines, Aegean frescoes, Minoan Kamares pottery, and the splendid gold, stone and ivory products of the Minoan and Mycenaean cultures.

The term ‘art’ should not be reserved, however, for those objects whose aesthetic and technical qualities make us think today of true works of art, admired in museums and collections. We considered here as an artwork any object for which the artisan has introduced elements that surpass the primary functional needs of the object. The simplest decoration, even on very common seals, vases or figurines, can express the social conditions in which it was made and used, workshop traditions, or the influence of other cultures, thereby providing an historical context. These artworks also incorporate disparate outputs and short-lived styles, and vary considerably by both period and region (mainland Greece, the northeast Aegean islands, Cyclades and Dodecanese, Crete). The challenge for the art historian is to discern the various influences and cultural or socio-political circumstances behind this creativity.

The chronological placement of the artworks is still one of the main difficulties in the study of Aegean art. Our first effort has been to date them, then narrow down their place of production, and try to situate them in their broader context of manufacture and use, among other categories of object. That is why this book is divided first in sections corresponding to the main periods, distinguished by major cultural or socio-political changes. These periods can be of very unequal length (‘Neolithic’ and ‘Early Bronze Age’ are of course much longer than the ‘Final Palatial Period of Knossos’ and do not compare with it!); but every section begins with a chapter ‘Artworks and their context’, in which the chronological subdivisions and the regional groupings are indicated. Indeed, regional aspects are also quite important; Aegean art encompasses several regions which, at least until the beginning of the Mycenaean period, maintain their own distinct identities.

It is in this chronological and regional framework that the different media (architecture, glyptic, painting, pottery, etc.) are then examined in this book. In this way, we can more easily recognize the mutual influences and borrowings between contemporary art forms, such as glyptic, fresco and pottery: these cross-craft interactions are among the main reasons behind the development of the Aegean arts, as are also the artistic transfers between the Aegean world and its neighbouring powers, whether Egypt or the Near East, in all periods, from the Early Bronze Age to the ‘International Style’ of the Mycenaean period.

References have been thoroughly updated in this book, to take account of recent discoveries and studies since the French edition. Recent adjustments to the date of the main chronological reference points for Aegean archaeology, such as the start of the 18th Dynasty in Egypt, or the volcanic destruction of Akrotiri at Thera (c.1560 BC), have also been considered. These advances show the vitality of scholarship in the domain of the Bronze Age Aegean history.

About the Author: Jean-Claude Poursat

Jean-Claude Poursat is Professor emeritus at the Université Clermont Auvergne in Clermont-Ferrand, France. He is the renowned excavator of 'Quartier Mu' at Malia, one of the most extensive town complexes of Middle Bronze Age Crete, and the author of many publications on various aspects of the Aegean Bronze Age....