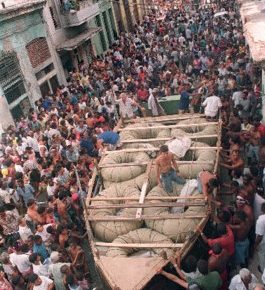 On May 1, 2006 approximately three-fourths of a million unauthorized immigrants across America courageously absented themselves from their jobs to participate in “The Day without Immigrants,” to convince owners of businesses and members of Congress how important immigrants were to the economy. Congress at the time was deliberating legislation to determine whether to legalize or continue to criminalize the millions of undocumented workers then in the country. Most of the immigrants who participated in the demonstrations came from Latin America. They wanted legal rights to stay and work. Although Cubans constituted the second largest Hispanic immigrant group in the country, they were noticeably absent from the demonstrations. Why? The book reveals how successive presidents, as well as Congress, granted Cubans unique entitlements so that they had no reason to join the protests. Even though most Cubans arrived in America without authorization, they enjoyed rights to work and their own path to citizenship, as well as access to special job training programs and scholarships for university studies. In addition, unlike other unauthorized entrants, they were rarely subject to detention and deportation.

The reasons for privileging Cubans changed over the years. President Eisenhower established the precedent, when Fidel Castro assumed power in 1959. In his effort to undermine Castro’s nationalist, populist, and increasingly state-dominated Marxist-Leninist Soviet-allied revolution, Eisenhower encouraged Cuban immigration and helped the mainly light-skinned, educated, and anti-Communist arrivals adapt well to America. Presidents Kennedy and Johnson followed suit. Combined, they admitted hundreds of thousands of Cubans with special entitlements. The three presidents envisioned that their immigration policy served their Cold War concern with delegitimizing global communism, while demonstrating the virtues of capitalism and democracy. Congress, in turn, funded the largest refugee program in US history for Cubans, and passed legislation to enable Cubans who arrived without authorization to become lawful permanent residents and citizens.

The book proceeds to detail how subsequent presidents granted yet more Cubans unique immigration rights and unique resettlement benefits, including after the Cold War’s end. They did so to address problems earlier entitlements generated or left unresolved, and new problems that arose, but also to accommodate to pressure from Cuban immigrant beneficiaries of earlier economic and political entitlements who sought the continued privileging of “their people.” Domestic politics came to replace foreign policy as the driver of privileging Cubans. Presidents found themselves “locked in” to the continued privileging of Cubans, in a “path dependent” manner. They found ending entitlements for Cubans too politically costly.

During his last full week in office President Obama finally retracted Cuban entitlements. He did so against the backdrop of a surge in unauthorized Cuban immigration that undermined US control over its borders and a growing socioeconomic and political divide among Cuban Americans that eroded support for continued Cuban immigrant privileging, when personally committed to a new Cuban foreign policy premised on cross-border bridge-building, not continued Cold War hostility. Obama took advantage of the new domestic political and foreign policy juncture to make immigration policy more equitable: but by retracting entitlements for Cubans, not by extending rights Cubans enjoyed to other immigrants.

Donald Trump, one of America’s presidents most hostile to immigrants, further shuttered Cubans’ path of privilege, which had the effect of making Cuban immigration more costly, risky, and illegal, without the promise of entitlements of old. He outsourced and offshored immigration control in general, including of Cubans, to Mexico and other Central American governments, which subjected aspiring Cuban immigrants to gang violence, as well as to detention and deportation. Nonetheless, past privileging lingered on, for determined Cubans who managed to evade the new US imposed entry barriers, typically with the help of human smugglers who charged $10-15,000 dollars for overseeing a trek, under harrowing conditions, through Central America to the US-Mexican border. The Cubans who successfully circumvented the barriers continued to be able to take advantage of legislated entitlements Congress left intact. After one year they thus could have their unauthorized immigration status adjusted to that of lawful permanent resident. No other unauthorized immigrants could do the same.

The book details how, for over half a century, ordinary Cubans and Cuban immigrants, and not merely the US and Cuban governments, shaped the Cuban immigrant experience, including in ways that backfired on Presidents and shaped electoral outcomes. Despite accounting for less than 1 percent of the US population, Cuban immigrants exercised outsized political influence.

I wrote the book to make known the range of unique entitlements Cuban immigrants have enjoyed, and the “path dependent” basis of their continued privileging. The book offers the most comprehensive analysis of US Cuban immigration policy and Cuban immigration since the Castro-led revolution. I wrote the book also to address how immigration policy might be reformed so that the US benefits from immigrants at the same time that immigrants receive more just and equitable treatment. In comparing Cuban with other Caribbean immigrant experiences, with Haitians’ above all, I highlight how differently the US has treated immigrants depending on their country of origin and their race, and how differently immigrants have experienced America as a result.

The book builds on my expertise. I have studied Cuba and Cuban immigrants for decades, in historical and transnational context. The book highlights the need for immigration reform if America is to live up to its egalitarian founding principles. Immigrants should be treated equally and equitably, and not deepen inequality in America.

About the Author: Susan Eva Eckstein

Susan Eva Eckstein is Professor in the Pardee School of Global Studies and the Sociology Department at Boston University. Specializing in social movements, rights and justice in, and immigration from, Latin America, she has single-authored, edited and co-edited nine books. She is the recipient of many fellowships, including from the John Simon Gugg...