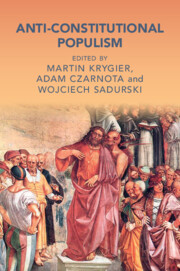 On 3 April 2022, Victor Orbán won his fourth straight election victory in Hungary. On 9 May, Ferdinand “Bongbong” Marcos Jr, the son of a former dictator of the Philippines followed President Duterte, with Duterte’s daughter as Vice President, to victory in the Philippines. Orbán doesn’t kill people, Duterte killed many, and so did the old Marcos, but they have something in common: they are part of a populist wave that is sweeping over much of the globe. And whether or not they kill or gaol when they are in power, they don’t kill to get there. They win elections. But they don’t make it easier for their opponents to win the next ones.

In recent years political movements of a decidedly ‘anti-establishment’ character have taken many countries by storm, and many observers by surprise. Among the characteristics these movements share is that they, and more particularly their leaders, claim uniquely to represent the true, real people of the country, a claim that does not depend upon, but frequently can boast confirmation in electoral victory, however the playing field is manipulated. For unlike standard-issue coup-ists and putsch-ists, communists and fascists (also anti-establishmentarian until they become established), these movements are not shy of elections. They feed off them.

However, these democrats’ relationship to their demos is singular: not all people, not even all electors, qualify as ‘the People’, only supporters of the movement. The rest are deemed inferior, whether because they differ politically or ethnically or religiously or in some other disdained way from the true people; often it is enough that they vote differently. They are cast, at least rhetorically, to outer darkness.

In particular, populists devote a lot of attention to elites, and here they make few distinctions. For they portray existing elites, not merely as opponents, but as enemies: self-serving, corrupt parasites living off the People and exploiting them. These parasites are not hard to identify: they are in prominent political and economic positions, they live in cities, particularly capital cities, typically have been to universities – many are ‘experts’ or listen to experts – they like to travel and they know too many languages. They’re at home everywhere but at home, where instead they promote alien and degenerate ways of living, loving and thinking. Central among them are legal elites.

Come the populist victory (not through revolution, to repeat, but election), those elites and the institutions they serve might survive populist transformation if they can be reshaped and repurposed, but they are on notice that they are not to get in the way. If they are not taken down they at least need to be shaken up, and their infected cadres purged and replaced.

There is great dispute whether all populists are authoritarian, but many turn out to be. When such populists gain power, their rhetoric is inflammatory, polarising, authoritarian, and so are they. But in many such regimes opponents aren’t shot, imprisoned or killed; though they are often sued. And though independent institutions, both public like courts and civil service and private such as media, are targeted for take-over, they are rarely destroyed. On the contrary, most of the new populists take law and legal institutions very seriously. Theye devote major effort to pretend to act and justify their acts legally, while the legal institutions are gutted, neutralised, their personnel replaced, and then mobilised for the regime.

And there is something else that is distinctive: their attitude to law. Many observers describe these distinctive attitudes to constitutions and to law as ‘constitutional populism’ because they pay so much attention to constitutional matters. But they do so with a twist. Their ambitions require not the neglect of constitutional institutions, practices, and principles, but their transformation. So constitutional review of laws goes on but no longer for the purposes of questioning the constitutionality of government actions; rather, it is used both to affirm such constitutionality, and deny the constitutionality of opponents’ acts or words. Judiciaries remain but they are re-staffed and re-purposed. Elections are competitive, not pure sham though often tampered with, but the conditions of meaningful public opinion-formation – such as independent media, freedom of speech and assembly, civil and political rights – are deliberately and systematically threatened, ‘chilled’, and eroded. Under these regimes constitutionalism is parodied, while its putative underpinnings remain, transformed. And so, the title of this volume: anti-constitutional populism. Its chapters explore many varieties and forms of this modern phenomenon, full as they are of unprecedented controversies, complexities, paradoxes and at times tragedy.

About the Author: Wojciech Sadurski

About the Author: Adam Czarnota

Adam Czarnota is Associate Professor in the Faculty of Law and Justice, University of New South Wales, and Professor of Law and Director of the Centre for Legal Education and Social Theory, University of Wrocław. He teaches philosophy and sociology of law as well as history of legal and political ideas and comparative law....

About the Author: Martin Krygier

Martin Krygier is Gordon Samuels Professor of Law and Social Theory at the University of New South Wales, Honorary Professor at RegNet, Australian National University, and Senior Research Fellow at the Rule of Law Program, Central European University Democracy Institute. He has written extensively on the rule of law, its challenges and challengers....