Why did Americans envision Oscar Wilde as a mushroom? 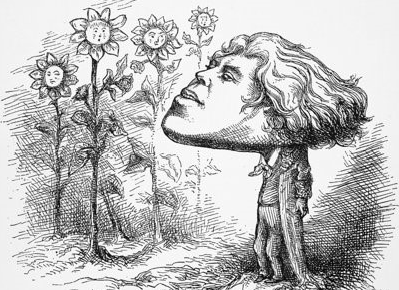 Why, in 1882, did Harper’s Weekly publish a cartoon by Thomas Nast depicting Oscar Wilde as a mushroom? The question is one that marks the crucial influence of British decadence on the shape of modern ecological thought.

The spores of this story appear as early as 1871, when critic Thomas Maitland (aka Robert Buchanan) turned to Charles Darwin to condemn decadent poets and artists such as Dante Gabriel Rossetti and Algernon Swinburne for “diligently spreading the seeds of disease broadcast wherever they are read and understood.” [i] Despite Buchanan’s attack on decadence as immoral, effeminate, and over-sexualized, the ‘70s saw the movement flourish across British culture, such that, in 1881, Gilbert and Sullivan found success on the London stage with Patience, a comic opera starring a decadent dandy with curiously botanical interests. With “a sentimental passion of a vegetable fashion” for a “not-too-French French bean,” the over-refined poseur “get[s] up all the germs of the transcendental terms, and plants them everywhere.” [ii] But before Patience could be sent across the Atlantic, producer Richard D’Oyly Carte needed a real-life dandy to go to the U.S. and teach Americans about the persona the show mocks.

Meanwhile, Oscar Wilde’s career was … well, what was it? A student at Oxford in the ‘70s, his studies of Darwin and the natural sciences were finding their way into his decadent philosophy of living one’s life and seeing oneself as art, with little attention to social convention. He was also writing some promising poetry but wasn’t yet making a career of it. And much like the youth of today (if my two nieces are anything to go by), if he’d been asked what he wanted to be when he grew up, he’d have probably said: “famous.”

And so, Wilde, a not-too-young young man trying to make a name for himself in the arts and culture industry, accepted D’Oyly Carte’s invitation to spend much of 1882 on a North American lecture tour discussing and performing decadence and aestheticism. Within two weeks of Wilde’s arrival, Harper’s Weekly published Nast’s light-hearted portrayal of Wilde the mushroom pontificating to a group of “Wild American sunflowers,” suggesting that, fungus-like, British decadence was threatening to establish its unnatural interests among the wholesome – and largely unimpressed – native plants.

Like Wilde, with his mix of studies in aesthetics and the natural sciences, decadents and Pre-Raphaelites, such as Walter Pater, Vernon Lee, Frederick Sandys, and Simeon Solomon, produced works in which the arts intersect with new models of natural evolution and species interaction, as my book Decadent Ecology demonstrates. Other contributors to the decadent movement who offered variations on modern ecological thought included occultists, such as Moina Mathers and Fiona Farr; neo-pagans, such as John Duncan and William Sharp; feminists, such as George Egerton and Michael Field; and authors of weird fiction, such as Arthur Machen and Algernon Blackwood.

Far from being simply the sultry air breathed by a clique of rarefied dandies, decadence was the inspiration for diverse authors and artists engaged with fascinating topics from trans-species intimacy and the erotics of decomposition to occult ecology and naturalist feminism. Ultimately, these innovations in literature and the arts helped shape our understandings of the sentient and non-sentient forces of the ever-mutating ecology of which we humans are a mere part.

About the Author: Dennis Denisoff

Dennis Denisoff is McFarlin Professor of English in the College of Arts and Sciences at The University of Tulsa. His awards and recognitions include the President's Award from both the Nineteenth Century Studies Association and the North American Victorian Studies Association. A past Sarwan Sahota Distinguished Scholar at Ryerson University, in 202...