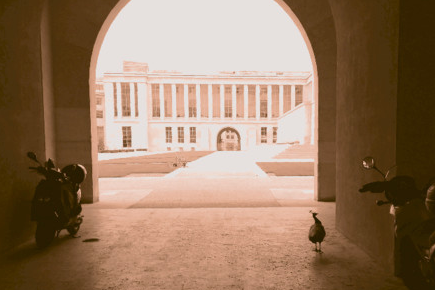 1.What piece of advice would you give yourself when starting out on this project?

This is advice I would give any person writing non-fiction: use a citation manager. I ended up doing all my citations by hand, and, well, if you’re an author just starting out—don’t be like me. You’ll hate yourself at exactly the moment you’re most exhausted by your project, too.

2.What was the most surprising thing you discovered during your research for Incredible Commitments?

Most studies of UN peacekeeping using 1989 as a rough starting point—the Cold War ends, peacekeeping as we know it today begins—and so I started out my analysis with the same idea. But while I was asking older people who’d experienced the peacekeeping mission in Rwanda what they thought about the UN, they kept bringing up the UN’s role as the decolonization authority in the region—their experiences with the UN were anchored in their experiences from that era. As someone who’s really interested in decolonization—and who takes historical perspectives on international relations really seriously—I was surprised it had never occurred to me before. It hadn’t occurred to me even though I know intimately how recent decolonization was—all four of my grandparents were born as colonial subjects! It was a really good lesson for me in how bounded your ideas can be by your training, even when you’re someone who embraces interdisciplinary thinking and historical reasoning—and that sometimes the best way to understand something is to ask open-ended questions and then just listen to people without taking the assumptions of your field as given.

3.What do you hope readers will take from Incredible Commitments?

We’ve got this incredible body of evidence in the field now about how effective peacekeeping is, but how peacekeeping works and if it works are two different questions. I hope this book helps us consider and complicate the how question by paying really deep attention to two peace processes—the Rwandan and Guatemalan peace processes of the 1990s—and by asking what participants in these two peace processes actually wanted the UN to do. There are two main points I hope readers will take from the book. First, we tend to think of peace operations as being discrete missions. But I argue there are really important ways we need to think of them as a system of interventions—and accordingly, that we should be mindful of how what peacekeepers do in one place might shape what happens in other places. The second is that—once we’ve made that shift—we have to really wonder what warring parties think about peacekeeping failures. A lot of scholarship focuses on the security guarantee that peacekeepers provide after combatants have signed a peace agreement. But what if you don’t think peacekeepers can help uphold your agreement? What then? Why seek out their assistance? Are you desperate for anyone to help you, do you think you’re different and your agreement won’t fail, or do you want something other than peace or security? My argument is that some parties to conflict are desperate and want nothing more than peace—but other parties to conflict seek out the UN’s involvement in peace processes and its help implementing their peace agreements for a whole range of material, tactical, symbolic reasons that may have very little to do with peace. In some cases, then, peacekeeping’s providing political and material benefits—not solving a security problem.

4.What are you working on now?

I’m working on a project about how UN Security Council members try to resolve incompatible norms, laws, and commitments—in particular, how they try to resolve the contradictions between norms of sovereignty on the one hand, and norms around stopping genocide and chemical weapons use on the other hand. I want to know what kinds of arguments they make, and how these arguments change over time, and over the life of the Security Council. We tend to think of these kinds of commitments as remote and the stuff of high politics, but the way they’re interpreted and enforced has real consequences for people living through violence.

5.What drew you to researching peace processes?

I really wish I had some kind of supervillain-style origin story I could give you—like, that my light-up Fisher-Price globe fell off a shelf in my bedroom in 1989 and knocked me out and when I woke up I was a tiny fanatic for multilateral conflict resolution, or something. But actually I just think they’re really interesting and important. They can encompass anything from the high formalism of the Balkans peace processes, where what you’re really trying to do is still the guns between elite combatants, to the informal but absolutely vital processes of local and traditional conflict resolution, restitution, and justice that offer the best chance for full-scale peace in a place. And they’re really where you see how varying conceptions of the “good” can end up at loggerheads. A peace process is an opportunity to remake society, to resolve the underlying axes of conflict, to reimagine the social contract, to make a genuinely more just world—and that opportunity is so rare. But you can’t do that if the people around the negotiating table don’t want it. And sometimes, we know something works better—like, we know more inclusive peace processes give people the best chance to reach a lasting peace—but still, peace processes exclude major groups of affected parties, like women, or victims, or refugees, because peace processes are also the process of getting the violent elite combatants literally sitting around the negotiating table to stop shooting at each other. I also think they’re really interesting because they’re such fundamentally social processes. You’ve got a group of people trying to resolve what are often structural problems—but so much depends on their personalities, on how they interact, on what they think is important, on how they communicate. And they’re wild to learn about. One thing I learned really quickly is that different accounts of the same peace processes can disagree on things as fundamental on the dates and topics discussed. It’s so intensely interesting to try to figure out what happened, and what you can learn about the world from how dramatically differently people saw something. That’s true of course of all social processes—and it’s fascinating to see play out in the combination of rare opportunities and high stakes that peace processes represent.

About the Author: Anjali Kaushlesh Dayal

Anjali Kaushlesh Dayal is an assistant professor of international politics at Fordham University....