Why Legal Titling Is Not an Economic Answer to Terrorism 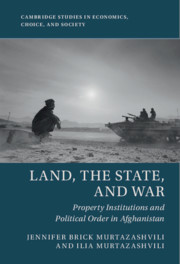 Ongoing violence is an unfortunate fact of life in many communities around the world. In Afghanistan, two decades of state-building followed decades of internecine civil war. Despite significant investments by the international community, by 2021, the Taliban regained control over the country.

On the occasion of the failure of the American-led state-building mission, it is useful to consider Hernando de Soto’s argument that legal titling – the recognition of property rights through a formal, judicial process – is what unlocks the productive potential of capitalism and in key ingredient to fostering political stability. According to his argument, property security is also an answer to terrorism. The reason is straightforward: when one’s property is more secure, one has to give up more to fight. Thus, legal titling is an economic policy response to political violence.

The unfortunate humanitarian catastrophe in Afghanistan triggered by the US withdrawal of troops illustrates why it is necessary to rethink the link between property and violence. First, Afghanistan illustrates that legal titling depends in part on the presence of an effective state. A legal title is a document that gives the holder of that document the right to call on the state to command others to respect those rights. A legal title that is not backed by a state is a hollow promise.

This means that much of the view of property – that legal titling caused political order – gets the story exactly backwards. The security afforded by legal titles is a consequence of property order, and so what is necessary is to first build a more competent state.

Second, it is not simply state capacity that is significant for legal title, but political constraints. The lesson from the so-called Western World is that a Shackled Leviathan is what ensures property rights are credible. Significantly, Afghanistan’s state-building efforts, both from 2001 to 2021 and for a century and a half before the American intervention in 2001, has been fixated on constructing a centralized state, with few efforts to create meaningful political constraints. Thus, the credibility-enhancing features of the government have always been lacking.

The Taliban’s swift takeover surprised many, though it would have been clear from consideration of property relations that state-building did not do much to produce a more competent and credible government in Afghanistan. From 2001 until present, the government has promised legal titling as a way to make cities prosper and to bring peace to the country. But when legal titling was offered, few took advantage of these opportunity. Few wanted government-issued legal titles. Why?

The reasons are complex, but they can be boiled down to two issues. One has to do with the ineffectiveness of government. Despite decades of investing in the state, the Afghan state never established itself as an administrative reality. There still has never been a national cadastral survey completed. Nor are courts considered competent and effective. Beyond administrative weakness, government-supported land grabbing has been a persistent issue.

The second has to do with self-governance. The starting point for analysis of self-governance is that anarchy does not mean disorder. Rather, anarchy, in the true sense, is about self-organization. What we find in Afghanistan is that self-governance often works especially well in providing for public goods and services, especially in areas where government is unreliable or predatory. And it is this self-governance that is a key to understanding why few Afghans took advantage of legal titling opportunities even when given the opportunity. The combination of a deeply flawed central government and robust customary governance is what ensured most Afghans would take their chances under anarchy than to try to register their land formally.

Legal titling improves incentives for productive activities. But for governments to use it effectively, it is necessary to first make progress toward a Shackled Leviathan. Increases in state capacity without constraints on its authority, or promising legal titling when informal and customary governance is more trusted than government systems of administration, risks confusion. And consideration of how land titling is going can be an important indicator of the success of state-building, or in Afghanistan’s case, reliable evidence that state-building is falling far short of what is promised.

What now, with the Taliban in charge? One of the activities that the Taliban used to earn some credibility was establishing land courts because the Karzai and later Ghani governments were corrupt, and citizens despised courts as ineffective and predatory. The reason that those efforts may have been somewhat effective in providing a forum to resolve disputes was because the Taliban had some authority in areas but were competing to win support. Now that they have the government the same issues arise: absent constraints, who would accept the Taliban’s promise to respect property rights? Without those constraints, how can there be a functional economy that will provide the government with revenue? Thus, the problem of establishing political constraints on government is as pressing as ever, perhaps more so, given the Taliban has done little to accept limitations on their power, nor to propose constitutional restrictions on their autonomy. One expects customary governance to remain the most significant source of governance. We anticipate that without constraints on state power, legal titling would result in modest improvements in property security, at best. The central problem of institutional reform remains to establish a framework for limited government, especially with a regime such as the Taliban, before investing in land titling registration.

About the Author: Jennifer Brick Murtazashvili

Jennifer Brick Murtazashvili is Associate Professor in the Graduate School of Public and International Affairs, University of Pittsburgh. She is the author of Informal Order and the State in Afghanistan (2016). ...

About the Author: Ilia Murtazashvili