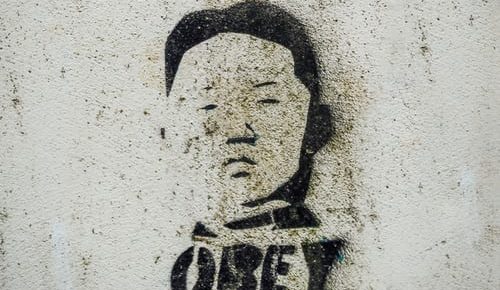 People shouting from soap boxes, newspaper vox pops on news programmes, social media all come to mind when we think of the public political sphere. Democracy, it is generally accepted, needs the public sphere to flourish. But what is less well understood is why the public political space is essential to preventing tyranny, and why its hollowing out is something that concerns us all.

How do you create silence? An easy step is to make the places for debate less accessible, more aggressive and create multiple realities where lies become commonplace and facts devoid of meaning. Silence can come from poverty. If engaging in the public sphere is beyond a person’s ability because basic needs like shelter or food become their prime worry, they become voiceless. A poverty of education also makes individuals voiceless. If access to education or the quality of education is tied to wealth, it takes a huge proportion of the population out of the public sphere. If people no longer understand their own system of government or feel they do not have the political knowledge they need to question or to take political leadership upon themselves, they become silent.

Silence can also come about because of aggressiveness. There is debate on cancellation but often this is about well-connected people with national newspaper columns and secure well-paid jobs merely receiving criticism they would rather not hear. Rather the individual who finds themselves on the receiving end of a twitter mob, often set upon them by the powerful, means they leave that public space. Trump was an expert at such tactics, using this form of non-regulated power to silence not only political opponents but members of the public who disagreed with him.

This can have a particularly gendered effect. It is well reported that women are often on the receiving end of toxic social media trolling and doxing. The levels of vitriol women face if they join political spaces often leads to their retreat or, for some, not joining public debate at all. BAME individuals, and others, often face similar barriers. If at least 50% of the population cannot openly engage in a political space, does it even deserve that name?

A public sphere where the poor, where women, where BAME individuals or where opposition voices fear to speak and debate, for a variety of reasons, does little to reinforce democracy. There may well be loud acclamations, bluster and sneering but if a huge proportion of a society are silent, what does that say about the health of that democracy? Would that democracy be able to withstand a push towards tyranny? Indeed, would not those who are silent argue they perhaps live in a world where tyranny already exists?

Preventing tyranny requires an active engaged public sphere. It requires disagreement.  But disagreement does not have to be bile filed. It can be rude, it can be loud, it may be annoying, but it does not have to be hate. This requires regulation. The absence of regulation of social media over the past decade is part – though far from the only part – of the public sphere’s stripping.  The unwillingness to regulate it, and who benefits from the absence of its regulation is something that is in everyone’s interest to consider.

About the Author: Aoife O'Donoghue

Aoife O'Donoghue is a Professor of International Law and Global Governance at Durham University Law School, UK. She publishes extensively on topics such as utopias and global constitutionalism, tyranny, feminism, the use of force alongside international legal history and theory, including her monograph Constitutionalism in Global Constitutionalisat...