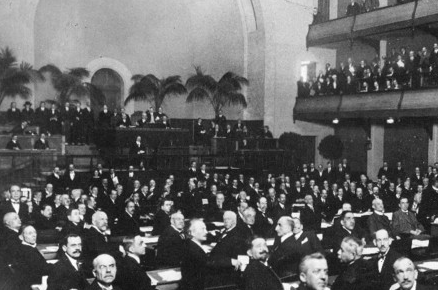 Before Covid-19 threw our global systems into chaos, an intense and urgent public debate focused on several other international concerns. In 2020, data from Brazil’s national space research institute, INPE, showed that 830 square kilometers of rainforest was cleared in the “Legal Amazon,” Earth’s largest rainforest, during the month of May 2020 alone, bringing the total clearing since August 1, 2019 to 6,437 square kilometers, an area larger than Delaware. Despite a global response to the failures of the Brazilian government— including public announcements by celebrities and repeated warnings from the scientific community that the combination of forest loss and the effects of climate change could trigger the Amazon rainforest to tip toward a drier ecosystem— international law was not harnessed. Instead, most of the calls to action focused on “private” domestic commercial actions (such as a ban on Brazilian timber).

The curious thing is that, as the ecological crisis continues to intensify, with deforestation becoming one of the central challenges in the fight against climate change, nobody is talking seriously about international environmental law as a recourse. Some solutions, such as Reducing Emissions from Deforestation and Degradation (REDD+), that aim to provide a financial incentive to governments, agribusinesses, and communities to maintain and possibly increase forest cover, are unfortunately insufficient given the demand for timber. Current results also indicate that this approach is limited, especially in developing countries (where most of the tropical forests are located), as alternative land uses (such as palm oil) can offer more immediate and guaranteed cash returns.

Voices advocating in the League of Nations during the interwar period, however, identified already in the 1930s a pressing need for collective international action to fight this outcome of industrialism and modernization. “Deforestation was one of the perils threatening mankind, and it was all the more to be feared because it always corresponded to a period of intense civilisation” , warned Paul Elbel, a French diplomat, in September 1938 at the League’s Assembly, what would later become the (more familiar) General Assembly of the United Nations, the successor of the League.

Back in the late 1930s, describing deforestation as a threat to mankind, was rather striking – as it still is today. With the interwar world occupied with redrawing European borders and facing any number of pressing concerns –peacekeeping missions, refugees, massive immigration – it is remarkable to hear voices calling for the League’s attention to the rapidly disappearing forests across the globe, the changing landscapes, and dangerous erosion.

Indeed, as we discuss the evolution of international environmental law and take away comparative lessons, we should also be careful with the suggested perspectives. The League (and other international organizations) turned to deforestation after it had tried to handle other more pressing problems: the state of the timber trade, which was thrown into disarray by the Great Depression and Soviet dumping policy. Therefore, the central concern was not the loss of trees, but mostly the dropping price of timber. However, and as the League discussed possible economic and industrial frameworks that would secure production, several organizations and diplomats voiced the concern that the West (and other regions too) had never experienced deforestation on this scale before, and the League even discussed some preliminary mechanisms to bind quotas of timber production in an effort to control and stabilize the market, and limit deforestation.

According to newly discovered archival literature, international environmental law was not an invention of the 1970s, as mainstream research claims. The truth is that trees and forests were not alone: throughout the 1920s and 30s, the League and other bodies devoted a great deal of attention to several ecological crises with which our current world is, unfortunately, familiar. Too familiar. The impending extinction of whales, for instance, also raised intense attention at that time, as did the urgent need to synchronize the battle against the spread of diseases from global peripheries; likewise, in this period an international antipollution convention against oil pollution of the sea was introduced. As we do today, the League strove to articulate legal solutions that would balance between commercial and industrial needs, on one hand, and the urgent – as it was perceived also in the interwar period – obligation to protect nature for future generations on the other. “Nature is therefore sending out a warning to the effect that the vandalistic methods of fishing now being applied can no longer be continued,” declared one of the minutes in the heated discussion on whaling in January 1927.

By now, however, these fascinating campaigns have been hidden by the general indifference towards the role and deeds (and failures) of the League. Among other things, the rise of environmental history and environmental law, given the huge obstacles policymakers are facing in the fight for our environment, justifies the study of the environmental regime of the League, as part of the evolution of the ecological crisis.

About the Author: Omer Aloni

Omer Aloni is Research and Postdoctoral Fellow in the Faculty of Social Sciences, University of Bar-Ilan, Ramat-Gan, Israel. He received his Ph.D. from Tel-Aviv University (Faculty of Law). He holds research affiliations with the University of Potsdam, the Rachel Carson Center for Environment and Society (LMU Munich) and the Max Planck Institute. H...