Magic in a Time of Plague

Written by: Mark A. Waddell 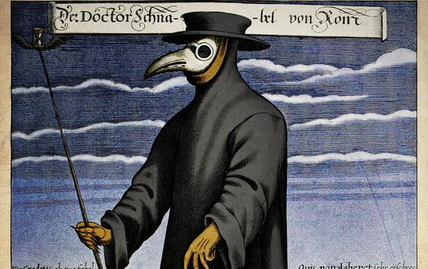 Despite repeated warnings from public health authorities that there is no magic bullet, the COVID-19 pandemic has inspired a wide range of dubious treatments ranging from bleach and hydroxychloroquine to silver and gemstones. A willingness to bypass conventional medical treatments in favor of “miracle cures” is not unique to the present moment, however, and Europe’s long battle with the plague sheds light on the public appetite for extraordinary remedies in the midst of a pandemic.

As I explain in my book Magic, Science, and Religion in Early Modern Europe, magical beliefs and practices existed at every level of premodern European society. At its most basic, magic was the deliberate manipulation of forces, properties, and correspondences hidden throughout the natural world, and many saw it as a powerful means of combating the plague, one of the most feared and widespread diseases of the time. As many as 200 million people in Asia, Europe, and North Africa died in less than ten years during the plague pandemic known as the Black Death, and it continued to reappear in European communities over and over again until the early nineteenth century. One of the most popular explanations for its periodic emergence was miasma theory, which suggested that diseases like the plague were caused by poisonous or pestilential air. The ominous, bird-like masks worn by plague doctors reflect this theory—the “beak” was often stuffed with fragrant herbs, spices, citrus, and other substances that were believed to purify the air.

This characterization of plague as a kind of poison informed how early modern people tried to protect themselves. Unicorn horn, for example, was famed in ancient Rome for its ability to neutralize poisons, and over time acquired a reputation as a plague preventative as well. It was widely available for sale in early modern apothecaries, but one could also turn to unlicensed medical practitioners—known disparagingly as empirics, quacks, or mountebanks—who flooded the medical marketplace in the sixteenth and seventeenth centuries. Many of these enterprising individuals promised extraordinary cures to people desperate for help or reassurance, though the remedies they sold were usually mundane substances dressed up in magical and mysterious façades.

Harnessing the occult potential of nature to defend against the plague was not just the purview of unscrupulous quacks, however. In a work published in 1609, a professor of medicine named Oswald Croll (c. 1563-1609) described how to create plague amulets with ingredients that included pulverized toads and menstrual blood, enclosed within a metal case inscribed with serpents and scorpions. These amulets exemplified a form of sympathetic magic in which different substances shared an invisible or hidden correspondence. Toads, snakes, and scorpions were all known to premodern Europeans as venomous creatures, while menstrual blood was considered by some medical authorities to be so poisonous that it spoiled fermenting wine in the cask and drove dogs mad if they consumed it. These substances exerted a sympathetic power on the miasmatic poison of the plague, attracting it to the amulet rather than to its wearer.

By the standards of the time there was a vast social distance between the reputable medical professor and the itinerant peddler of quack remedies, but with the benefit of hindsight we can appreciate that both were responding to a universal hope: that, hidden within nature, the ingenious or the fortunate might find a remedy for their society’s most feared disease. Today, scientists have done exactly that in their creation of vaccines against COVID-19, but their cautious rhetoric and careful projections will struggle to compete with the same promises of swift, easy, and certain recovery that drove early modern people to the magical remedies of hucksters and frauds in their own time of plague.

About the Author: Mark A. Waddell