Ruling the world: Freedom, Civilization and Liberalism in the Nineteenth Century British Empire 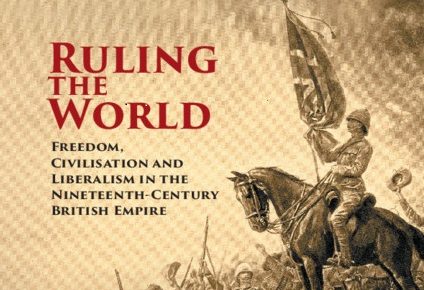 When James Stephen, permanent under-secretary, entered the Colonial Office on 1 January 1838, he was confronted by piles of despatches from across the world. Stephen told his sister that he spent every day “diligently … keeping back the flood of papers from deluging us” and on this particular day were despatches dealing with the Great Trek in southern Africa, the liberation of formerly enslaved apprentices in the Caribbean, massacres of Aboriginal people in New South Wales and major rebellions in Lower and Upper Canada. Ruling the World stems from the observation that governing the British empire meant dealing with multiple crises like these, everywhere and all at once.

It may seem obvious, but this observation is actually absent from almost all of the colonial and imperial historiography. Historians of particular colonies tend to see London-based imperial officials as interested only in their country of specialism, while imperial historians tend to think of them as pursuing one coherent policy at a time across the empire as a whole. In fact, senior officials like Stephen oscillated frustratedly between the desire to manifest consistent imperial values and the practical need to assure the security and prosperity of Britons in some forty colonies and in the United Kingdom itself.

Stephen bemoaned the lack of steady principle in imperial governance, identifying it as “the source of our greatest national misfortunes. It lost us the United States … It has created slavery in the West Indies and has converted Australia into a den of thieves. To the same cause our Canada troubles may very well be ascribed and if they are now met by expedients which look no further than to the passing days those troubles will infallibly issue in national disaster and disgrace”. Yet he and his counterparts found it almost impossible to do more than respond to such “expedients”. His colleague Thomas Elliot despaired that ministers “will doubtless always be guided by a policy, but they can hardly expect to despatch such complicated and arduous questions by a single maxim. To deal with cases on their merits, to labour patiently against opposition in some quarters, and to welcome and reciprocate co-operation from others: these, in so wide and diversified a sphere as the British Colonies, appear to me tasks and duties inseparable from the function of governing”.

Based on research in the Colonial Office, East India Company/India Office and Foreign Office files, Ruling the World tells us how three key ideas of Victorian governance – freedom, civilization and liberalism – were manifested (or not) in three “snapshot” years: 1838, 1857 and 1879.

In 1838 the Empire of sail was in the midst of rapid expansion and re-orientation after the loss of the American colonies and the end of the Napoleonic War. Imperial administrators were focused on questions of freedom: if a growing empire was to be governed most effectively, which kind of people should be allowed what kinds of freedom? What should happen when the freedom of colonisers conflicted with the freedoms of other imperial subjects? Which people were suitable for coercion into doing what kinds of work in the aftermath of slavery, where and for whom? Who was entitled to a say in colonial government and who was not? We see how these questions were answered simultaneously in the emancipation of those formerly enslaved, the pacification of the settler rebellions in the Canadas, the handling of famine in India and the prosecution of the First Anglo-Afghan and the First Opium Wars.

In 1857, the empire’s consolidation through steam technology was blighted by interlocking crises around the world. A new generation of self-confident men administering the empire asked, to what extent should Britons impose their own civilization on others whom they now ruled? When colonial subjects resisted, was it right to use violence against them, assuming that it was for their own long term benefit? What kinds of technological and bureaucratic innovations would enable British governance to be sustained and better integrated around the world? We examine the effects of imposing British civilizational norms in the concurrent Xhosa Cattle Killing, Indian Uprising and Second Opium War.

Finally, in 1879, ambitious imperial men with telegraphic communication at their disposal, were seeking to transform the world in Britain’s liberal image. But they counterpoised an emerging liberal governmental consensus at home with its seeming opposite, imperialism, overseas. To what extent, these men asked, should a form of government founded on individual rights and responsibilities, be extended to subject peoples of colour? What kind of individual characteristics were attached to race? By the late Victorian period there was an ever-widening gap between most Britons’ perception of their empire and most imperial subjects of colour’s experiences of it, manifest in a second major Indian famine, the Second Anglo-Afghan War and the multiple wars of imperial confederation in southern Africa. Disavowal of the British Empire’s foundations in racism and violence, and emphasis on its more progressive values, plays a key role in imperial nostalgia in Britain today. By attending to imperial rule everywhere and all at once, Ruling the World highlights the genesis of that disavowal in the late nineteenth century governance of empire itself.

About the Author: Peter Mitchell

Peter Mitchell is a writer and historian from Newcastle. He is the author of Imperial Nostalgia (forthcoming)....

About the Author: Kate Boehme

Kate Boehme is a Leverhulme Early Career Fellow at the University of Leicester. She has published on South Asian History in a number of journals, including the Journal of the Royal Asiatic Society....

About the Author: Alan Lester

Alan Lester is Professor of Historical Geography at the University of Sussex and Professor of History at La Trobe University. He is the author of Imperial Networks: Creating Identities in Nineteenth-Century South Africa and Britain (2001) and the co-author of Colonization and the Origins of Humanitarian Governance: Protecting Aborigines Across the ...