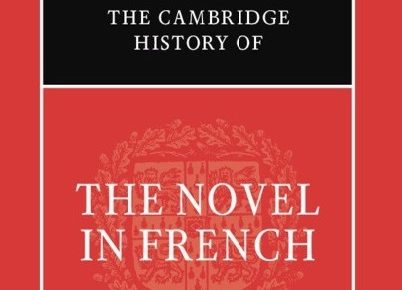 The breadth and variety of works that can be gathered together under the heading of ‘the novel in French’ is nothing short of breathtaking. Of course France is a major source for these works, but so too are Canada, Haiti, Martinique and Guadeloupe, Senegal, Cameroon and Rwanda, Algeria, Tunisia and Morocco… The novel in French is a global phenomenon, inextricably connected with histories of imperialism, colonialism and their still continuing aftermath. In bringing together the contributions that make up The Cambridge History of the Novel in French I wanted to produce a volume that reflected this exceptional diversity while at the same time exploring and illuminating the echoes, interconnections and borrowings that are discernible between authors and texts, from the late middle ages up to the twenty-first century.

Julian Barnes has written that ‘in all the arts there are usually two things going on at the same time: the desire to make it new, and a continuing conversation with the past’ (Keeping an Eye Open, Jonathan Cape, 2015, p. 7). This is true of the novel, of course, the most popular of literary forms, and the goal of better understanding this dual thrust motivates our approach in the History. It is also true of literary history and another goal of our History of the Novel in French was to provide not just an up-to-date account of novel writing in French since its beginnings, but one which is in dialogue with the existing work in the field. This itself was a fascinating challenge: there are scores of excellent literary-historical studies of, say, the nineteenth-century novel in France or of post-colonial literature in French. But it is in fact over a century since anyone has attempted to provide as broad and overarching a survey as we offer in our History. The last substantive work of this sort was written by the conservative scholar George Saintsbury, who published the two volumes of his History of the French Novel in 1917 and 1919. These tomes were subtitled ‘From the Beginning to 1800’ and ‘From 1800 to 1900’. Explaining why he stopped at 1900, Saintsbury indicates that ‘it does not appear to me […] that any definitely new and decisively illustrated school of novels has arisen since the death of M. Zola.’ Additionally, he deems it inappropriate to ‘discuss living persons’ (A History of the French Novel, MacMillan and Co., vol. II, 1919, pp. 11-12)

Our History, fortunately, has no such qualms on either count and its forty chapters contain a wealth of wonderfully rich material on the novel in French in the twentieth and twenty-first centuries, from major authors Saintsbury just missed out on such as Colette and Marcel Proust, to writings—wholly absent from Saintsbury’s work—from countries and territories that had been subject to French colonial rule. We also cover, of course, the later flowerings of the twentieth century and our contemporary period as well as subjects such as literary prizes and theories of the novel. The sections of our History covering the periods that are treated by Saintsbury do so with the benefit of a further century’s-worth of critical, theoretical and editorial insights. And those that follow demonstrate emphatically that the riches of Paris-centric and ‘Hexagonal’ literary culture (realist and naturalist fiction, the roman-fleuve, the existentialist novel, the nouveau roman, the Oulipian novel…) are matched by those produced far distant from the cafés of Saint-Germain: such as the Caribbean fictions of Condé and Chamoiseau, entre autres, the panoply of works written by authors from North and Sub-Saharan Africa, and the novels written by authors neither born in French territories nor native speakers of the language, such as Chahdortt Djavann and Vassilis Alexakis.

The novel in French is a world in itself. Our History lets you take a tour.

About the Author: Adam Watt