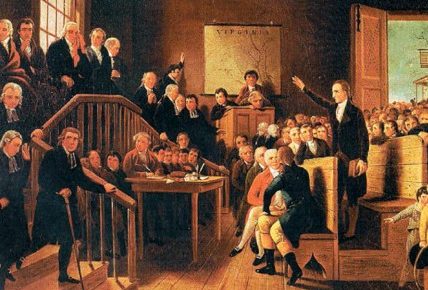 Since the first English settlements in North America, Christianity and its sacred text have had a significant influence on American jurisprudence. This reflects Christianity’s imprint on Western legal traditions in general and the English common law in particular. Early colonial laws, especially in New England’s Puritan commonwealths, drew extensively from biblical sources as interpreted within the colonists’ theological traditions. Christianity also contributed to an evolving constitutional tradition in the colonies and, later, newly independent states and nation, culminating in the U.S. Constitution. This is evident in broad principles, such as the separation of powers needed to check the abuse of government powers vested in human actors marred by original sin (Genesis 3), as well as in specific provisions such as setting standards of weights and measurements; requiring “the testimony of two witnesses” for convictions for treason; and prohibiting double jeopardy, cruel and unusual punishment, and corruption of blood.

American law and politics have been shaped by many traditions and perspectives, including British constitutionalism, Enlightenment liberalism, and classical and civic republicanism. Adding Christianity to this mix provides a more complete picture of the diverse influences on the American legal system and jurisprudential thought. While it is important to identify and examine this source of influence, its significance should not be overstated nor should other perspectives be ignored.

Great Christian Jurists in American History, a recent addition to the Cambridge University Press “Studies in Law and Christianity” series, focuses on the interplay between religion and law in American legal culture by examining the jurisprudence of 19 eminent jurists representing various eras in American history, from the establishment of English settlements in the early 17th century to the 21st century. Among them are judges as well as legislators and legal philosophers.

The essays in this collection take seriously religion’s role in shaping the thought and practice of the profiled jurists. Each chapter examines a selected jurist who not only had a significant influence on law, but also clearly identified with the Christian tradition and purportedly drew on Christianity to inform his or her jurisprudence. These jurists sought to apply their Christian faith, theology, biblical interpretations, and ethical framework to their understanding of the law, landmark cases they decided or litigated, or influential treatises or canons they drafted.

Religion informed the jurisprudence of these jurists in diverse, interesting, and sometimes surprising ways. Consider, for example, the Puritan lawyer and governor of Massachusetts Bay, John Winthrop, who espoused a legal regime built around the concept of covenant, which meant that, although all authority comes from God, it must be grounded in mutual consent to be legitimate. In his famous law lectures, the influential delegate at the Constitutional Convention and later U.S. Supreme Court justice, James Wilson, gave a sophisticated account of the Christian natural law tradition. Like every 18th century Supreme Court justice (with one exception), he believed that a judge may appropriately declare a statute to be void if it conflicts with natural law. More recently, Supreme Court justice Antonin Scalia, a devout Roman Catholic and prominent proponent of an “original meaning” interpretive methodology, professed paradoxically that one cannot separate religion from one’s intellectual life and, yet, he said his job as a judge is to apply the meaning of a text without regard to policy considerations or moral values.

Christianity and its sacred text are woven into the fabric of American jurisprudence. Great Christian Jurists in American History offers insights into the legal minds that played key roles in incorporating, expressing, explicating, and defending these religious threads in American law and legal traditions.

About the Author: Daniel L. Dreisbach

Daniel L. Dreisbach is a professor in the School of Public Affairs at American University in Washington, DC. His research interests include the intersection of religion, law, and politics in American public life. He has authored or edited ten books, including Thomas Jefferson and the Wall of Separation between Church and State (2002) and Reading ...

About the Author: Mark David Hall

Mark David Hall is Herbert Hoover Distinguished Professor of Politics and Faculty Fellow in the William Penn Honors Program at George Fox University. He has written, edited, or co-edited a dozen books, including Did America Have a Christian Founding?: Separating Modern Myth from Historical Truth (2019) and Roger Sherman and the Creation of the Ame...