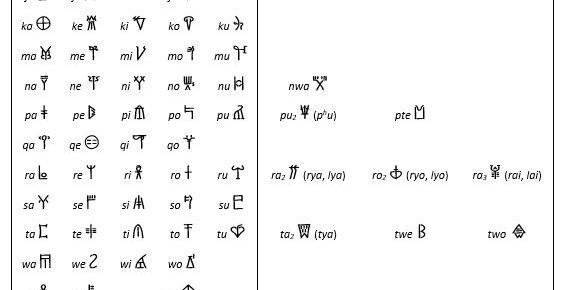 How can we study written signs that we can’t read? This is the central question of my forthcoming book, The Undeciphered Signs of Linear B: Interpretation and Scribal Practices. The Linear B writing system, used for administrative documents in Late Bronze Age Greece (c.1400-1200 BCE) was deciphered in 1952 by Michael Ventris, who showed that this writing system recorded an early form of the Greek language; but nearly 70 years later, 14 of this writing system’s 87 syllabic signs are still ‘un-deciphered’, their sound-values unknown or disputed.

Often, the reason these signs are still undeciphered is simply that they’re very rare – the rarest, *86, has just six known examples (though the sixth was only just published earlier this year… so discovering new examples is still possible!). Other signs are more common, but we still don’t have enough evidence to work out what sound-values they represent. One of the signs most likely to be decipherable is sign *56, which appears in a word *56-ra-ku-ja, an adjective describing the colour of textiles; the existence of another colour adjective, pa-ra-ku-ja, in an almost identical context, makes it very likely that these are the same word, and that *56 has a value similar to pa. It’s also been argued that two names, *56-ru-we and ko-ru-we, refer to the same man, so that *56 instead has a value similar to ko – but there’s no clear evidence to show that these aren’t just different people with similar names. Most attempts at deciphering these signs, whether by identifying spelling alternations like these, or by interpreting the terms they appear in as Greek words, run into the same problem of not having enough evidence to show whether the proposed identification is correct.

So how can we learn more about signs we can’t decipher? One way is to look at the signs whose sound-values we do know: by thinking about what type of signs exist in Linear B, what their origins are, and how they were used, we can gain a much clearer idea of why certain types of signs were used, and so what kinds of signs are most likely to exist in principle amongst the undeciphered signs. I could then look at individual undeciphered signs and see how the ways these were used might fit with the most probable types of sound-values. More than one sound-value is still possible for most of the signs, but this still leads to a much greater understanding of the possible places of these signs within the writing system – and provides a good basis for further work if or when more new examples of any undeciphered signs are discovered.

Another way we can use unreadable signs is to think about ways to analyse a writing system without reading it – for instance, through palaeographic analysis: the study of handwriting and the different forms in which individual signs appear. The final part of my book explores some ways in which palaeography can help us understand wider aspects of the Linear B writing system: for instance, by looking at the similarities and differences between writers’ handwriting, and comparing these to what we can reconstruct from their documents about the administrative work they did, we may be able to find out more about how these people learned to write and how they interacted in the course of their work. Thinking about this during my PhD (on which the book is based) is what led me to my ongoing research into the practices of the people who wrote the Linear B tablets, which I’ll be sharing on my blog as this research continues.

About the Author: Anna P. Judson

Anna P. Judson is a Research Fellow in Classics at Gonville and Caius College, Cambridge. Her Ph.D. thesis on the undeciphered signs of Linear B won the University of Cambridge's Hare Prize for the best Classics thesis. She is now researching the writing practices of the Mycenaean scribes....