Who Sets the Limits of Conventionality? 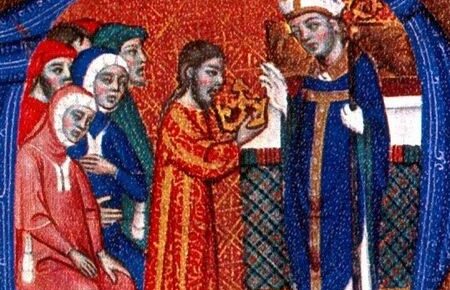 The popularity and spread of the rite of self-coronation reached its zenith with Napoleon’s imperial self-coronation in Paris in 1804. This event achieved world notoriety in large part because of the monumental painting by the court artist, Jacques-Louis David, currently on display at the Louvre. This picture, and the popular belief around the ritual of royal self-coronations, presupposes that the king could only receive sacred authority through the mediation of a priest, solemnized in the ceremony of the investiture of the sovereign. For a contemporary audience, this painting would have been another sign of the (supposed) process of secularisation, thanks to which modern Western societies distinguished between the temporal and the spiritual.

Yet though Napoleon’s self-coronation in 1804 is generally taken to have been an extraordinary event that broke the long tradition of kings being crowned by bishops, research shows that the ritual of self-coronation was already known and practised in Ancient Persia and by some Christian European kings in the Middle Ages. Perhaps it is time to challenge the presumed non-conventionality of this ritual, which was in fact quite commonly known and practised among medieval kings.

There is an amazing text about Peter IV of Aragon. After performing his self-coronation in 1336, the king implemented a conscious triple strategy to ensure that the form of his ceremony would not remain an isolated incident but would be a tradition. Firstly, he fixed the rites of self-coronation by writing a new ceremonial, in which he attempted to give political legitimacy to the gesture of self-coronation, identifying it as the conventional ritual of the royal investiture. He justified the complete autonomy between the spiritual and the temporal spheres by arguing that they correspond to two different realities, the unction and coronation.

We have to deal with two realities very solemn: the first spiritual and the second temporal. Proper to the first is, namely, the holy sacrament of unction, which in the old law was dispensed by the princes among the priests as we read in the Old Testament, in the word of God as spoken by the prophet: “and thou shalt anoint unto me him whom I name unto thee” [1 Sam. 16: 3] (…) [the second] is temporal, which is to say, it refers to the crown, by which the earthly princes receive dominion over the people, and of this we have a foreshadowing as can be read in Holy Writ: “And he brought forth the King’s son, and put the crown upon him, and gave him the testimony” [2 Kings 11: 12].

This story, and all the historical data I gathered in my Medieval Self-Coronations, invite us to challenge the idea of who sets what is conventional and non-conventional in history and society. As Michel Foucault argued, we tend to force the interpretation of the past looking for progressive continuities. As a result, we create some myths such as the supposed “process of secularisation”. But the reality is usually more complex than this. In his article “Nietzsche, Genealogy, History”, Foucault argues:

Another use of history is the systematic dissociation of identity. This is necessary because this rather weak identity, which we attempt to support and to unify under a mask, is in itself only a parody: it is plural; countless spirits dispute its possession; numerous systems intersect and compete. The study of history makes one “happy, unlike the metaphysicians, to possess in oneself not an immortal soul but many mortal ones” (Nietzsche). And in each of these souls, history will not discover a forgotten identity, eager to be reborn, but a complex system of distinct and multiple elements, unable to be mastered by the powers of synthesis. (…) The purpose of history, guided by genealogy, is not to discover the roots of our identity but to commit itself to its dissipation. It does not seek to define our unique threshold of emergence, the homeland to which metaphysicians promise a return; it seeks to make visible all of those discontinuities that cross us.

This is a great lesson from history. Perhaps the time has come to revise a paradigm so deeply established, not only in the popular imagination that sees Napoleon’s self-coronation as the paradigm of unconventionality and transgression, but also in scholarship.

In the end, there is no absolute mystification in societies, just as there is no absolute secularisation, among other things because, as Clifford Geertz put it, “a world wholly demystified is a world wholly depoliticised” – and that is a utopia. Thus, the popular trope of the progressive secularisation of the modern versus the clerical medieval world vanishes when confronted with the persistent reality of the practice of self-coronation in the Middle Ages. Historical experience proves that it is preferable to speak of tensions, transactions, transfusions, transferences, alternations or transfers between the temporal and the spiritual (“a crooked line”), rather than to trace a single upward line towards secularisation from the Christian society of the fourth century to present secular modernity. Even today, a harmonious balance between the temporal and the spiritual, and a reciprocal respect for their proper autonomy, is vitally important for improving the world that we live in.

About the Author: Jaume Aurell

Jaume Aurell is Professor of Medieval History at the University of Navarra, Spain. His previous publications include Authoring the Past (2012), Theoretical Perspectives on Historians' Autobiographies (2015) and, as editor, Rethinking Historical Genres in the Twenty-First Century (2017)....