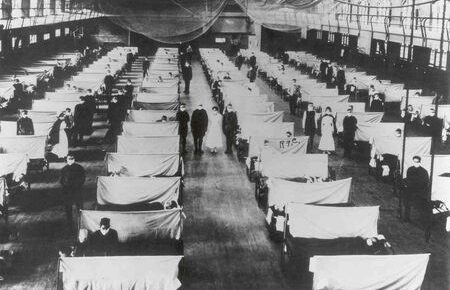 In late 2019 an outbreak of COVID-19 was detected in the city of Wuhan, China. Within weeks, the virus had spread across the country, becoming an epidemic. The disease spread rapidly across the globe and in March 2020, the World Health Organization (WHO) officially declared COVID-19 to be a pandemic.

This is the first time that an outbreak has been characterized as a pandemic since the H1N1 “swine flu” of 2009.

So what exactly is a “pandemic” and how does it differ from “outbreak” and “epidemic”?

The term dates back to the 1660s when it meant “incident to a whole people or region”. Pandemic is derived from Latin pandemus, which comes from Greek pandemos, “pertaining to all people; public, common.” Pandemic is modeled after “epidemic”, which arose in the 1600s and meant “common to or affecting a whole people.” Outbreak also goes back to the 1600s when it referred to “an eruption, a sudden and violent manifestation”, which is still revealed in contemporary usage in phrases such as “an outbreak of war” and “an outbreak of hostilities.”

In reference specifically to disease, “pandemic” can be traced back to the 1850s.

There are distinct differences between an outbreak, epidemic, and pandemic. An “outbreak” is a sudden rise in cases of a disease in a particular place, such as a “measles outbreak” or an “outbreak of salmonella.” An “epidemic” is a large outbreak that may be limited to a smaller area than a pandemic, such as a “flu epidemic” or “typhoid epidemic.” Epidemic often implies contagion or infection, although it is often used hyperbolically to refer to an increase of something in society, as shown by the phrases “opioid epidemic” or “the obesity epidemic.”

A pandemic is a global epidemic. The word refers to a disease epidemic that has spread across a large area, usually across several countries or multiple continents and affects a large percent of the population.

Even though COVID-19 has reached pandemic status, local upsurges or flare-ups of the virus are still referred to as “outbreaks.” Pandemics often unfold in “waves” of infections, with new outbreaks recurring after the initial peak of cases.

There have been many infectious diseases that have reached pandemic status in history, including the Bubonic plague, smallpox, Spanish flu, HIV/AIDS, yellow fever, Ebola, swine flu, MERS, SARS, and now the related COVID-19 (SARS-CoV-2).

Back in March, WHO’s Director General Tedros Adhanom Ghebreyesus said of this declaration, “Pandemic is not a word to use lightly or carelessly. It is a word that, if misused, can cause unreasonable fear, or unjustified acceptance that the fight is over, leading to unnecessary suffering and death.”

Pandemic is a scary word but it isn’t used to indicate the severity of a disease, it just refers to the degree that a disease has spread.

In August 2010, one year after H1N1 was declared a pandemic, it was announced to be a “post-pandemic period.” No doubt we all look forward to that time when the world is declared to be in a post-COVID-19 phase.

For a further discussion of related topics, see Chapter 5 of Karen’s forthcoming book ‘On the Offensive: Prejudice in Language Past and Present’.

About the Author: Karen Stollznow

Karen Stollznow is an Australian-American linguist and author. She is a Researcher at the Griffith Centre for Social and Cultural Research and was formerly a Research Associate at the University of California, Berkeley. Her books include Language Myths, Mysteries and Magic (2014), Would You Believe It? (2017) and God Bless America (2013). Karen is ...

Ableist Language and the Euphemism...

Ableist Language and the Euphemism...

Interactional rituals and the...

Interactional rituals and the...