Marsquakes may originate in a well-known fracture

Reports of the first marsquakes – seismic events caused by crustal movement – aroused my interest. Recordings of earthquakes here on our own planet have taught us everything from the number and nature of layers in the interior to where the most active faults are located. The seismicity of the Earth contributed vital information that led to the understanding of plate tectonics, the organizing theory of how the Earth’s interior moves and controls the form of the surface.

NASA’s InSight lander arrived at Mars in November, 2018 to fulfill a long-desired need: for geophysical measurements about the planet’s interior. While the Viking 1 and 2 landers had seismometers over 4 decades ago, their location on top of the spacecraft meant they were not mechanically coupled to the ground. In the end, they proved most useful for recording the vibration from Martian winds. InSight was designed to avoid such problems by having a seismometer that was placed on the surface (Figure 1) and then covered. 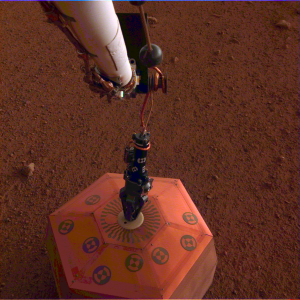 Figure 1: The robotic arm on NASA’s InSight lander places a seismometer (the copper-colored object) onto the surface of Mars. It was later covered with a Wind and Thermal Shield (credit: NASA/JPL-Caltech).

This has reduced noise as intended. The surface of Mars may have multiple sources of vibration, including impacts, rockfalls, and atmospheric motions as well as marsquakes. While many of the events recorded since early 2019 have sources that are hard to discern [1], the identification of Cerberus Fossae as the probable source of a marsquake is not surprising. The geologic context of the event is evident on Map MC-15 (Elysium) in The Atlas of Mars, part of which is shown in Figure 2. 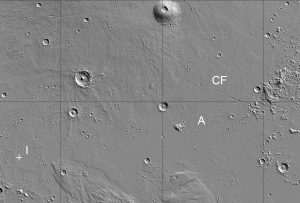 Figure 2: A portion of Elysium Planitia shows the location of the InSight lander (at I), while 1500 km to the east some of the fractures of Cerberus Fossae (CF) trend east-southeast. Athabasca Valles (A) originates at the fossae and flows down slope to the west-southwest (MOLA hillshade image, view about 1200 by 1800 km, north at top, 0°N to 20°N, 134°E to 164°E; created with JMARS/Arizona State Univ.).

Athabasca Valles may be originally of fluvial (flowing water) origin [2]. Some researchers have suggested that it experienced glaciation. Most recently Athabasca Valles directed the flow of lavas to the southwest, creating some interesting flow features (Fig. 15.N in the Atlas). Athabasca has one of the youngest surfaces on Mars, dating from the most recent Late Amazonian Epoch, according to the relative paucity of impact craters [3]. Long before the InSight mission, geologists suggested that Cerberus Fossae could be the source for both the Athabasca lava flows and flowing water. Seismic activity in Cerberus Fossae is consistent with this explanation.

Where else might young features lead us to expect seismic activity on Mars? Volcanic rock units and their source vents of Amazonian age (the youngest division of Martian history) are one place to look. The geologic map of units by Period (Figure 5.9 in the Atlas) shows that Tharis and Elysium contain most of these. While it is true, as Squyres [4] contends, that a lander mission leads to some of the most exciting discoveries, valuable context comes from the global geologic story read from orbiter images and other measurements. The two types of missions complement one another, giving us a detailed picture of the geologic history of Mars. I congratulate the InSight team on their success, and I’ll be very interested to know where else marsquakes will originate.

About the Author: Kenneth Coles

Kenneth S. Coles, co-author of The Atlas of Mars 2019, is Associate Professor and Planetarium Director at Indiana University of Pennsylvania. An award winning teacher, he has dedicated his career to sharing planetary science and geology discoveries with university stude...