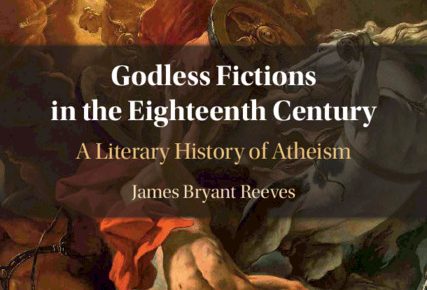 One of the strangest scenes in William Cowper’s long, digressive The Task (1785) occurs halfway through the poem’s sixth and final book. In previous books, Cowper’s masterpiece ruminates at length on topics as diverse as his pet hares, the proper way to raise cucumbers, and, more seriously, Cowper’s sense that England is completely falling apart. Yet suddenly, as his poem draws to a close, he gives us a narrative set piece: An “atheist” named Misagathus, who “scorns” both “God and goodness” (VI: 485–6), rides horseback near a cliffside with his much more pious friend Evander. The two are getting along well enough as they debate their positions on God, morality, and the afterlife, until—quite unexpectedly—Misagathus charges forward on his horse with a “madman’s fury” (VI: 513), hoping to leap over the cliffside and into the rocky waters below. By killing himself in front of his God-fearing friend, Misagathus hopes to prove to Evander that he truly isn’t afraid of the non-existent afterlife, that his atheistic beliefs are entirely genuine. Unfortunately for Cowper’s atheistic madman, his horse is much too rational to participate in this scheme. The horse stops at the cliff’s edge, Misagathus is enraged, and then he and his friend continue their ride.

But the story doesn’t end there. Minutes later, Misagathus’ horse races to the cliff’s edge once more, this time tossing his rider off his back, “Sheer o’er the craggy barrier” (VI: 554). Misagathus lands in the raging ocean and quickly drowns, “the victim of his own tremendous choice,” according to Cowper’s narrator (VI: 558). Evander apparently continues on his way, having won the argument by default.

Throughout the eighteenth century, fictional atheists frequently met such untimely ends (though several also converted on death’s doorstep). These set pieces might seem rather odd and unnecessarily cruel to modern readers. Yet, lest we think we’ve left such tropes behind, it’s worth noting that the stereotypes of atheists and atheism that circulated throughout the Enlightenment remain current in many circles today. See, for just one example, the painfully bad God’s Not Dead (2014), an evangelical film that stormed the box office in the American Bible Belt, spawned multiple sequels, and whose primary villain is an atheist who dishes out psychological abuse to all and sundry until he is finally killed off by an inattentive motorist. In some circles, then, it’s obvious that atheists are still not very well liked. (In fact, a 2016 study published in Social Forces indicated that anti-atheist sentiments are “strong” and “persistent,” with almost 42% of Americans claiming that atheism is incompatible with their vision of American society.[1])

My recent book, Godless Fictions in the Eighteenth Century, offers a literary history of atheism that traces the genesis of these pervasive negative perceptions of unbelief. I argue that, for many eighteenth-century authors, the figure of the atheist represented the absolute limits of human sympathy, and eighteenth-century literati were insanely worried about the dystopian possibilities of atheism. Of course, modern American evangelicalism is a far cry from the 18th-century British evangelicalism to which Cowper subscribed, and few of the examples cited in Godless Fictions are as ham-fisted as what occurs in God’s Not Dead. One crucial difference highlighted in my book, for instance, is that many eighteenth-century authors who rejected unbelief were often entirely unconcerned with doctrinal purity or with condemning non-Christian theists. (In the chauvinistic God’s Not Dead, on the other hand, a young Muslim girl’s conversion to Christianity frees her from her stereotypically abusive, fundamentalist father, who begrudges her all her hobbies and enjoyments.) In fact, for authors like Jonathan Swift, Alexander Pope, Sarah Fielding, and many others, fears about atheism surprisingly produced a sort of cosmopolitan, ecumenical appreciation of other world religions (namely, Islam and Hinduism), even in authors (like Cowper) who were firmly committed to specific forms of Christianity. While atheists were depicted as uncaring and depraved—Cowper’s Misagathus “needlessly” (VI: 563) puts his horse’s life in danger, for instance, which is why Cowper rejoices in his death—many theists considered community, sympathy, and interfaith generosity to be the hallmarks of belief.

Thus, in contrast to current religious debates, which are too often characterized by a simplistic sense of hostility between East and West,[2] the eighteenth century was a moment when sympathetic understanding between theists from around Britain’s emerging empire was consistently imagined and promoted. Of course, this understanding was simultaneously predicated on the troubling exclusion of nonbelievers. Indeed, eighteenth-century authors’ potent protests against atheism—often made for aesthetic rather than rational or epistemological reasons—go some ways toward explaining why belief remains such a live issue, even in today’s modern, secular world.

[2] For instance, the Social Forces article cited above indicates that, perhaps unsurprisingly, Muslims have recently “surpassed atheists as the least-accepted group” in the United States. According to the study’s authors, almost 46% of Americans believe Muslims do not fit with their vision of American society, compared to almost 42% who say the same of atheists. See Edgell, et al., “Atheists and Other Cultural Outsiders,” 609, 619.

About the Author: James Bryant

James Bryant Reeves is an assistant professor of English at Texas State University, San Marcos. His work has appeared in Eighteenth-Century Fiction, the Keats-Shelley Journal, and SEL Studies in English Literature 1500–1900. He has received fellowships and awards from the National Endowment for the Humanities (NEH), Linacre College, Oxford, and U...