Written by: Richard J. A. McGregor 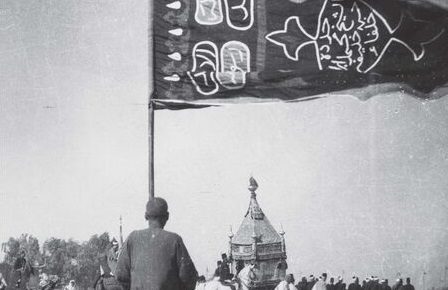 Imagine it’s the middle of the fourteenth century, and you fall from the sky, landing in the heart of medieval Cairo. I’m assuming we’re all historians of religion, so upon arrival you immediately set out to explore the Islamic landscape around you. What exactly would you see? What would the practice of Islam look like? In this experiment, although essentially a tabula rasa, you would not wander aimlessly around the city; on the contrary, you would easily discern which locations, objects, and groups of people, were relevant to your venture. This is the starting point for my book, Islam and the Devotional Object: Seeing Religion in Egypt and Syria, which takes up a series of devotional objects, and seeks to tell a new religious history through their biographies. Each chapter centers on things that the subject – recently fallen from the sky – would surely have encountered. In order to tell these stories, in addition to many hours walking the old streets of Cairo, I had to dig through a wide variety of written sources, including chronicles, travelogues, poetry, and the literature of theology, ethics, law, and religious devotion. It turns out many real people recorded the history of these objects, and their reactions to them.

My training in graduate school provided me with effective tools for exploring the written record of the pre-modern Islamic world. In seminars at McGill University we pored over difficult texts in Arabic, some still in manuscript form, untangling theological and philosophical debates of the medieval period. As my abilities developed, and my academic career evolved, I was increasingly drawn to the question of how religious ideas relate to the devotional material world built around them. My interest was not in the normative dos and don’ts of Islamic legal opinion, but rather the ways that these constructions —these visual, material, and aesthetic practices—constituted religious practice. The Islamic texts I had read in graduate school, and continue to explore, are of course part of this complex religious culture, but they clearly did not explain everything. The insights coming from the book fill out this religious history in new and at times unexpected ways through a turn toward religious objects.

The book builds its arguments on case studies of practices and objects that featured prominently within the visual culture of medieval Egypt. These include the procession of the kiswa covering (for the Ka’ba) around the city of Cairo, and its subsequent journey on the Hajj to Mecca. Elements of textuality within a rich performative and aesthetic environment abound throughout the long history of this ritual. Further, parading within the city among strategic devotional monuments, and the related displays of banners and other image-texts, typically associated with the Sufis, also reflect the mobilization of visual culture. The display and identification of human remains, such as the relics of prophets and saints, offers insight into a dynamic visual discourse within the Islamic tradition The book also treats Muslim practices of iconoclasm, which in the pre-modern period often focused on ancient Pharaonic objects and images. The story to emerge charts the rise and fall of a uniquely Islamic visual culture, which was more open to its ancient inheritance than one might expect.

About the Author: Richard J. A. McGregor

Richard J. A. McGregor is Associate Professor of Religion and Islam at Vanderbilt University. He is the author of Sanctity and Mysticism in Medieval Egypt (2004), co-editor of The Development of Sufism in Mamluk Egypt (2006) and Sufism in the Ottoman Era (16th–18th C.) (2010), and a translator of the Arabic edition of The Epistle of the Brethren ...