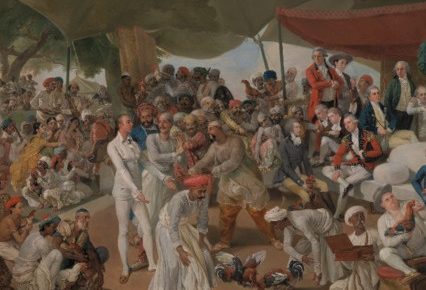 As the United Kingdom scrambles to find a new place for itself in the world following its withdrawal from the European Union in January 2020, there is much talk in political circles of building a ‘Global Britain’. The promise of the country’s transformation into an independent global power is for many a tantalising one – and a vocal part of this discourse has invoked the country’s imperial past as proof of its ability to fulfill this role. But if we cast our gaze back to the beginning of Britain’s imperial venture, to the seventeenth and early eighteenth centuries when the country first struck out to build a global presence for itself, the actual experience provides a rather more sobering picture, as my new book The Origins of the British Empire in Asia, 1600 – 1750 reveals.

For a small power like England, the early modern world was a difficult and dangerous place. Success in regions like Asia – a complex and crowded political space dominated by the world’s superpowers – could only be achieved by working within the foreign political and economic frameworks it encountered, not independent of them. Launched in 1600, the English East India Company spent several decades attempting to rigidly pursue the interests of its domicile nation state – the export of woolen cloth, undermining its European rivals, using force to acquire control of key trading goods – but by mid-century the Company had largely failed in these aims and faced financial ruin and corporate collapse. By 1657 its directors had planned to sell the entire Company for just £14,000.

England’s presence in Asia was only pulled back from the brink when English officials on the spot learned through much trial-and-error that success could be achieved only by integrating the Company with the thriving economic and political systems of the regions they operated in. On a personal level, this meant individual officials ingratiating themselves socially and culturally with local communities: adopting indigenous fashions and practices, converting to non-Anglican faiths, marrying into prominent local families, and even assuming local office. On a public level, officials surrendered up the Company’s political independence and recognised the sovereignty of a range of powerful Asian rulers over the Company, its settlements and its trade.

By working within the carapace of Asian states and empires, the Company was finally able to access the commercial and political movers and shakers necessary to unlock an unprecedented period of growth. In exchange for tribute to foreign rulers, supporting their military campaigns against rivals, securing their maritime borders, and increasing their commercial revenues, the Company was imbued with a broad spectrum of rights and privileges that allowed it to expand its operations to become the largest trader in Asian goods by the eighteenth century. Asian suzerains and patrons granted the Company customs-free trade, the right to build forts, the government of ports and cities, authority to exercise judicial power, and regularly protected it from dangerous enemies.

In the early modern world, England’s journey to global power was not an independent one, but instead was woven through a transnational tapestry of subordination to foreign rulers, alliance with non-European elites, integration into Asian communities and the refashioning of English aims and strategies to accommodate and serve a largely foreign cast of emperors, merchants, religious leaders, and courtiers.

About the Author: David Veevers

David Veevers is a Leverhulme Early Career Fellow at Queen Mary University of London. He has published articles in the Journal of Imperial and Commonwealth History and the Journal of Global History, and won the Royal Historical Society's Alexander Prize in 2014. He is co-editor of The Corporation as a Protagonist in Global History, c.1550 to 1750 (...