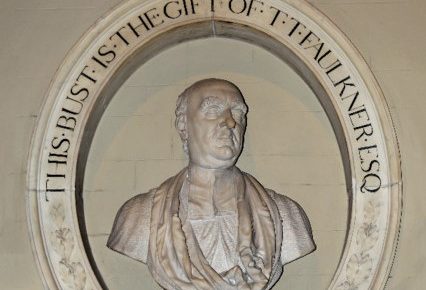 Some reasons for writing a book are obvious from the start, but others emerge more slowly. With Swift in Print: Published Texts in Dublin and London, 1691-1765, I knew from the outset that I wanted to focus on the material books, pamphlets and papers in which Swift’s works were first published, because I wanted to share with readers the thrill of engaging with eighteenth-century print. While working on vol. II of the Cambridge Edition of the Works of Jonathan Swift (Hoaxes, Parodies, Mock Treatises) I’d also particularly enjoyed exploring library collections in Ireland, so I knew that I wanted to emphasise the connections and disconnections between the Dublin and London book trades in Swift’s lifetime. It was clear too, since Swift’s works often came to press only after a long delay, that the books, pamphlets and papers needed to appear in their order of publication, to make clear the chronology of their availability to early readers. Through all this, I hoped to keep the print products firmly in the foreground, not just the decently printed ones with their neat ornaments, but also the squashed, blotchy ones printed from worn type on the minimum quantity of paper. All of them, in presenting the writings of Swift, contributed to a late early modern publishing arc that was less a livelihood in itself than an aspect of a professional churchman’s public role.

But as I went on it became clearer that there was a larger and more pervasive reason for writing the book. Emerging into the street one winter evening from a day happily spent handling eighteenth-century books, I saw an illuminated shop window advertising what seemed, to me at least, a faintly ludicrous proposition: the warm sound of valve radio. Suddenly I was back in the terraced house we left when I was five, in a living room dominated by a black radiogram the size of a chest freezer. A wedding present to my parents, it had a 78 turntable that still worked (with a little box of sapphire needles that my father would lift me up to so that I could help pick out the new one). But the wireless function had soon failed, and the associations for ‘valve’ in our house did not noticeably include ‘warm’. Whether with reference to the wireless, or the little veneered television with its BBC/ITV/Off knob, ‘valve’ was typically heard alongside ‘wants a new’, or simply ‘gone’. It’s easier to focus on the special qualities of a technology when its annoyances have receded into the past.

But print too is now part of that past. Books, pamphlets and papers used to discharge a lot of everyday functions, and even many of us who grew up navigating print artefacts now find digital tools easier. The skills and dispositions of an analogue world now look increasingly distinctive of a different culture. In the 1680s, Joseph Moxon’s pioneering manual of print practice, Mechanick Exercises on the Whole Art of Printing,evoked deeply embodied skills. Moxon specifies the exact deployment of  ‘the Brawn of the inside of the upper Joynt of his Arm’, ‘the Balls of his two middle Fingers’, and ‘the hollow between his hand, Thumb, and Fore-finger’. The work might involve manipulating ‘a Feather dipt in a spoonful, or little Pot, or Oyster-shell, &c. of Sallad Oyl’, and skilled improvisation might also be required: ‘sometimes he chews a small bit of Paper, and with the Point of his Bodkin forces that in on one side of the Space’. Some aspects of the culture that Moxon recorded would last a very long time: for instance, he tells authors to underline words to be set in italic, just as I was taught to do with pen and ruler, and later with the typewriter shift key. But by the end of graduate study I was already committing text to a university computer via teletype machine; and now, with Swift in Print, I have for the first time corrected proofs on screen instead of inscribing the traditional marks on paper. Ask me in a few months how to mark up proofs, and I may not quite remember.

As I look back over the past of print, I also look back with mixed feelings on the analogue world of previous generations in my own and my husband’s families: pattern-maker, rate-setter, draughtsman, tracer, compositor, lace curtain designer, bookbinder, ledger-ruler, morse-code operator, signalman, shorthand typist. It’s only when it’s over that we can start romancing the valve, and it was only when the factory my grandfather worked at went electric that I could stand at his knee by the treadle lathe he’d salvaged and admire the bright unspooling of swarf from a new brass screw. Swift in Print also emerges from a moment when it’s becoming clear that something’s over: now that printed books are no longer quite so obvious, perhaps we can hope to see more clearly what’s special about them.

About the Author: Valerie Rumbold

Valerie Rumbold is Professor of English Literature at the University of Birmingham. She is author of Women's Place in Pope's World (1989) and has edited Pope's Dunciads (1999, 2007) and Swift's Parodies, Hoaxes, Mock Treatises (2013). She is a General Editor of the Cambridge Edition of the Works of Jonathan Swift and of the Oxford Edition of the Wr...