The Purchase of the Past 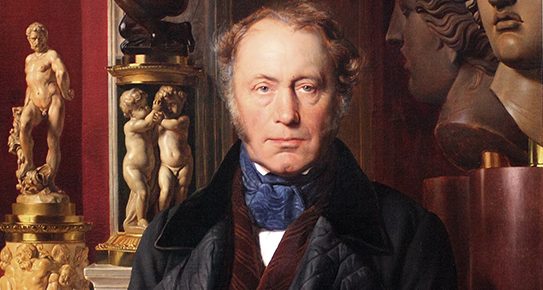 We live in a world which is saturated by historical references: vintage and retro are the codewords for authenticity; revivalism is all the rage, whether in how we dress and how we decorate; our attics double up as our family archives. We have become so accustomed to this way of living that we take for granted its relatively recent origins. In 1915, Sigmund Freud described a “new and wider fatherland” inhabited by modern man, an imaginary “museum…filled with all the treasures that the artists of civilised humanity had in the successive centuries created and left behind.” In trying to understand how this worldview emerged, historians have typically been drawn to the evidence of grand public memorials or national museums, institutions which proliferated across the nineteenth century (itself baptised the ‘museum age’). But the thirst for history also insinuated itself on an intimate level: it was encountered not just in official spaces but, thanks to a vibrant marketplace for second-hand artworks and bric-à-brac, it was also cultivated at home. Collecting was one of the central means by which diverse individuals could consume, invoke, and participate in, the stuff of history.

My new book, The Purchase of the Past, sets out to explore the craze for collecting antiques in the nineteenth century, as well as the fascination that the past exerted over its proprietors. Whilst the passion for history swept across the whole of Europe, my book argues that its emergence in France was particularly dramatic and contentious, as it coincided with a political revolution. 1789 was a turning-point in the concept and management of the national heritage- what the French call le patrimoine- as some of the collections formerly belonging to the monarch, the aristocracy, the clergy and the corporate institutions were reclaimed as the property of a free, regenerated people. Just as important, however, 1789 was also a turning-point for the modern art market, as revolutionary liquidation sales threw the remnants of these collections into circulation, thereby creating a huge windfall for a new generation of sharp-eyed speculators and scavengers. Regarding heritage, then, the French Revolution had both centralizing and centrifugal effects: alongside the new national museums grew up in parallel a constellation of individual collections, a ‘private patrimony’, each with its own character and attitude towards the pre-revolutionary past.

Thanks to nineteenth-century novelists like Balzac and Flaubert, we have been accustomed to write off post-revolutionary collectors as eccentrics or maniacs. To its critics, the desire to surround oneself with the vestiges of past societies and civilisations smacked of morbid nostalgia, or a forlorn retreat from the modern world. Yet the practice of private collecting had important public implications across the nineteenth century. Paris was recognised as one of the foremost capitals of curiosité in Europe, from the bargains lurking in stalls along the Seine to the glittering spectacle provided at auction houses like hôtel Drouot. Parisian collectors formed their own associations, lent objects to major international exhibitions, galvanised research and scholarship, rediscovered styles deemed decadent or taboo, championed historic preservation and transformed the ethos of civic museums through strategic donations and trusteeship. In short, these private collectors took their self-appointed role as stewards of French art and history seriously; as a result, their relations with rival, public institutions were complex and sometimes contentious.

In pulling together the different case-studies that make up the book, I was struck by the recurrent conflicts over what should be collected, and by whom, and where such prestigious objects should be displayed. Such issues were not a matter of personal taste but rather spoke to wider norms of elite distinction and French national traditions. As a result, collecting became integral to cultural politics in an age of revolutions; whilst it helped bring diverse periods of French history back to life, it also stoked jealousies over who deserved to possess the past, fuelling snobbery, chauvinism and anti-Semitism. “We value our heritage most when it seems at risk; threats of loss spur owners to stewardship,” according to David Lowenthal. “Heritage never means more to us…. than when we see it inherited by someone else.” This book uncovers a century of Parisian private collectors, from the collapse of the old regime to the Belle époque, tracing both the past’s emotional hold over them, and their (often unacknowledged) hold upon France’s cultural riches.

About the Author: Tom Stammers

Tom Stammers is Associate Professor in Modern European Cultural History at the University of Durham. He is a historian of modern France, specialising in visual and material culture; he works frequently with museums and heritage organisations, including collaborating on exhibitions, and is a regular contributor to arts reviews like Apollo....