Learning to Live with Uncertainty 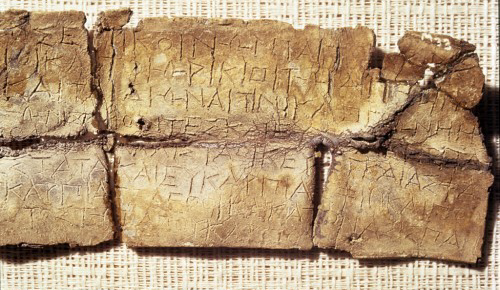 ‘Gods. The Onchesimoi ask whether there is a plague/famine threatening them?’

‘The Dodonaeans ask Zeus and Dione whether it is because of the impurity of some man that god sends the storm?’

‘Nikokrateia asks by sacrificing to which of the gods would she do better and be relieved of her disease?’

The questions above are examples of oracle questions from the corpus of 4000 or so inquiries inscribed on lead tablets found at the oracle of Zeus and Dione at Dodona in NW Greece. In general, these oracle questions were concerned with areas of life that were uncertain, and making decisions whose outcomes potentially posed significant risk.

Nikokrateia asks for relief from her disease: health is a common subject of inquiry. Among the other question topics, some concerned the future: e.g. travel, having children, getting married, choosing a profession, moving to another city. But people also asked about past events including suspected crimes, hidden treasure, concealed adultery. Most of the questions from Dodona were consultations by ordinary individuals, rather than states: Nikokrateia’s question exemplifies one of the remarkable aspects of this ancient material—that it includes the voices of both men and women.

Why am I re-reading these now? The current situation forces us to live with the stomach-churning anxiety of uncertainty—from deep uncertainty (unknown unknowns) to epistemic uncertainty (due to limited data or knowledge) to aleatory uncertainty (relating to luck or chance); all alongside a strong sense of risk or imminent threat. For many of us, confronting so starkly this variety of uncertainties is a new and painful experience, not one to which our modern lives are generally susceptible.

Reflecting on ancient Greek oracular consultation might seem an odd source of support in these circumstances, but it is striking how the individual voices of those anxious individuals resonate across the centuries, and what insights are prompted by consideration of their ritual practice.

Take for example, the structure of the questions that were asked at Dodona, that tend to be formed in one of two ways. First, and most commonly, the question asks for a selection from two possible courses of action—should I do x or y / x or not? The person posing such a question has narrowed down their options to a choice of possible activities that are within their power. But, even then, they admit the ongoing presence of uncertainty: rather than asking for a definitive answer, questions tend to begin ‘Will it be better if…?’; alongside Zeus, the questions address Tyche, the goddess of uncertainty, acknowledging her continuing influence over mortal lives. The other prevailing question structure is rather different: it asks to which supernatural power the questioner should make sacrifice in order that x or y should occur. There’s still some agency (the questioner wants to make sure they address the right divinity), but it is basically an admission of mortal limitations; and a request for support in a time of suffering.

Oracular consultation has long puzzled modern scholars—was it a surrendering of autonomy or simply a rubber-stamp? A closer examination of the questions asked at Dodona suggests its role was more sophisticated: it provided the Greeks with a way to reflect on, and learn to live with, the prevalence of uncertainty. And perhaps this is a skill we need to regain. As a recent study has argued, in a post-truth society in which facts are contested, scientists and politicians are wary of admitting to uncertainty; but as the study goes on to argue, admissions of uncertainty are, in fact, more likely to promote trust. [1]

About the Author: Esther Eidinow

Esther Eidinow is Professor of Ancient History at the University of Bristol. Before she became an academic she worked as a scenario writer, with clients including UNAIDS and the World Economic Forum. Now her research focuses on ancient Greek society and culture, with particular interest in religion, magic, and (ancient) futures thinking, and engage...