Kenneth Coles, co-author of, The Atlas of Mars 2019, describes features on the Martian surface. Will you be able to spot the "Mountains of Mitchell" or the seasonal polar retreat this summer?

Astronomy magazine has an article in the May 2020 issue on the “Mountains of Mitchell.” The author, Thomas Dobbins[1], gives a fascinating history of observations of Mars by Ormsby Mitchel, who built a refractor telescope at the Cincinnati Observatory in 1845. One of the features he documented is seen in this Hubble telescope image (Figure 1). 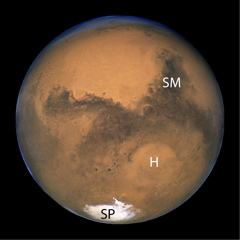 The south polar ice cap, which is undergoing seasonal retreat in this image (SP), has left an outlier beyond the margin of the rest of the ice cap. The so-called “Mountains of Mitchel” were once thought to be a high region that retained frost. I pulled out the Atlas of Mars to search for the terrain that retains frost cover later than surrounding regions in southern hemisphere spring. The prominence of Syrtis Major and the Hellas basin in the Hubble image (SM and H, respectively) led me to suspect that the coordinates given by Dobbins (longitude 300° to 330°) were the older, positive-to-the-west longitude system. Indeed, the region where frost persists is between 30° and 60°E and 70° to 80°S.

Among several million spacecraft images of Mars, those with regional or global coverage would best show the extent and variation of frost. Malin Space Science Systems has produced “Mars Weather Reports” since 2007 (http://www.msss.com/msss_images/subject/weather_reports.html). Each animation spans a week. Here is a frame from an animation for late southern spring in MY 30 (Figure 2). 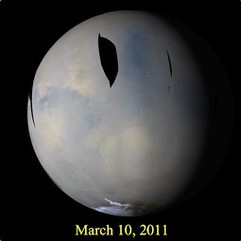 Figure 2: View of Mars by the Mars Color Imager (MARCI) on the Mars Reconnaissance Orbiter (MRO). The south polar region, including the retreating cap of frost, is at the bottom of the image
(Ls = 251°, view centered at about 55°E, 15°S; credit NASA/JPL-Caltech/Malin Space Science Systems).

A similar feature is seen in different Mars years and confirms what has been reported since the mid-nineteenth century. To see where this feature falls on the map of Mars, I turn to the marvelous tool created by my co-author Philip Christensen and his talented staff at Arizona State University, the free JMARS software program (https://jmars.mars.asu.edu). One of the image layers available is the Mars Orbiter Camera Daily Global Map (MDGM). The images (Wang and Ingersoll, 2002 [2]) cover nearly a Martian year, from mid-1999 to early 2001, or Ls = 135° in MY 24 to 111° in MY 25.

Viewing various days from this mapping cycle is a fascinating journey through the retreat of frost cover in one Mars season. The shape and features of the “Mountains of Mitchell” are a clear match with the Hubble image. For example, the tiny hole in the frost outlier on the Hubble image of this region corresponds to the 111-km crater Main on the maps. I encourage interested readers to consult the article by Dobbins or try making your own plot in JMARS and decide why the frost persists where it does.

Mars and Earth will approach one another through the middle of 2020 up to opposition in October, when we get the clearest view of the two-year cycle. I will be out with a telescope to enjoy the show, and encourage you to look also. If you don’t have a telescope, a nearby observatory, planetarium, university, or astronomy club likely will.

About the Author: Kenneth Coles

Kenneth S. Coles, co-author of The Atlas of Mars 2019, is Associate Professor and Planetarium Director at Indiana University of Pennsylvania. An award winning teacher, he has dedicated his career to sharing planetary science and geology discoveries with university stude...