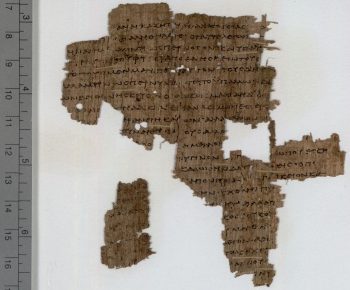 In the preamble to his History of the Peloponnesian War Thucydides declares that the twenty-year conflict between Athens and Sparta was a war like no other, an object lesson for humanity involving what for him was the whole known world. His purpose in writing was to discover by careful research the truth about events in the recent past—events that, he believed, given the historical constant he calls “the human element” (to anthrōpinon), will likely recur in some form in the future (1.22.4).

Thucydides’ appeal to the past in order to understand the present and anticipate possible outcomes in the future aligns closely with techniques employed by ancient practitioners of medicine. That is not surprising since he himself survived the Athenian plague of 430 BCE, a plight that was clearly a formative experience. In fact, the introductory remarks to his plague narrative read like shorthand for his whole historical method (2.48.3):

I leave it to someone else, physician or layman, to say as much as he knows about where this disease is likely to have originated, and declare what causes he thinks are capable of bringing about so great a change. For my part, I will describe what it was like. I will show what to look for, so that if it breaks out again, one can recognize it in advance and not be caught unaware. For I had the disease myself, and I saw with my own eyes others who suffered from it.

As our own world reels from the disruptive social and economic impacts of the novel coronavirus, some commentators, I think rightly, blame the extent of its effects on structural, systemic failures and vulnerabilities in the human political economy and in our relationship to the natural world. One philosophically inclined Athenian, a younger contemporary of Thucydides, looked over his shoulder at his own city’s recent past and came to a similar conclusion, and the approach he took to resolving its problems is instructive.

Plato was in his late twenties when Thucydides died. We often forget that his work is grounded in the aftermath of an historical crisis. Indeed, Plato’s magnum opus, the Republic, is a calculated response to the political and epistemic failings that sparked the Peloponnesian War, which in turn led to Athens’ precipitous decline as a regional power. The Republic, as I read it, is a philosophical thought-experiment about how to create and maintain a durable, sustainable society in light of such failures, and Plato himself, to use contemporary parlance, proves to be something of a systems modeler in this regard.

“Cities come to be because none of us is self-sufficient.” That is Plato’s opening salvo to a description of a theoretical state Socrates proceeds to build from scratch. The result is a bucolic utopia where excess is eschewed, communitarian values reign supreme, and the diet is plant-based; a city whose inhabitants, “not producing children beyond their means,” “pass on to their progeny a life just like the one they themselves enjoy” (369b-372d). One of the Republic’s interlocuters derides this quaint arrangement as a city fit only for pigs (376e). (“What, no meat or sauces?” he objects.) But Plato has Socrates proclaim this so-called first city, echoing the medical metaphors of Thucydides, “true,” “genuine,” and “healthy,” as opposed to the “luxurious, feverish” one that was Athens in his day. It is that second city, sick with infection that the rest of the Republic undertakes to remedy.

Whether we accept the specific formulations of the Republic or not is irrelevant. But the premium the Republic places on living within limits—limits dictated by the availability of natural resources—and its recognition of the need for broad structural change in society and for a reorientation of individual motivations and priorities rings true across the millennia.

In the aftermath of the coronavirus crisis, we will need a similarly radical, whole systems approach to analyze and remediate the feverish state of affairs of the recent past, an approach that, so long as we still inhabit this planet, also takes full account of that historical constant—“the human element”—to ensure that our lives and polities are sustainable and resilient in future.

About the Author: M. D. Usher

M. D. Usher is Lyman-Roberts Professor of Classical Languages and Literature and a faculty member in the Environmental Program at the University of Vermont. He is the author of academic books and articles in the field of classics, including A Student's Seneca (2006), and has also written books for children, poems, and two opera libretti. With his w...