“Just open the door and let the women out!” So said to me a law professor at Kabul University, Afghanistan in 2006.  She was responding to Taliban’s formulaic and age-old patriarchal justification for the unsuitability of women for political authority, presumably due to their “nature.” She articulated the necessity of mobility, and demanded the unimpeded freedom of action and movement for women.  Political mobility and freedom to choose are the quintessential mandate of women in the second decade of the 21st century.  From Northwest Africa to Southeast Asia, and anywhere in-between Muslim women are mobilizing, joining their voices and marshalling their resources, determined to have a seat at their society’s political table.  Increasingly educated and well informed, women have challenged the rigid patriarchal constructions of gender (in)justice, political/legal inequalities, and gender hierarchy in the Muslim world. They come from all walks of life, backgrounds, beliefs, classes, and strata, religious or secular, and are determined to have a seat at the political table, one that has long been so stubbornly monopolized by men. Not wishing to feed the tired universalized colonial narrative of victimized and passive “Muslim women,” nor willing to suffer the intolerant “fundamentalist” and essentialist discourse of Islamists in their own home countries, women activists and scholars of all backgrounds have shown considerable awareness of and reflexivity to local and global political dynamics. They have questioned the male domination of political authority and monopoly of sacred knowledge and have challenged patriarchal institutions of power on both fronts. Unwilling to subordinate their piety to misogynist “orthodoxies,” women scholars of Islam have pursued a two-pronged strategy. First, to retrieve from the recesses of historical neglect the names and biographies of women who contributed to religious knowledge and gained religious authority; and second, to pursue and develop a “feminist theology,” based on modernist and interpretive reading of the scripture: one that is egalitarian, tolerant, and inclusive. Women’s political authority, however, has received less systematic attention; it is highly contested and fraught with tensions and contradictions, and has faced a much tougher patriarchal backlash from within the Muslim world.

Meaningful political authority and representation at the highest echelons of the state is still far out of women’s reach, and not just in the Muslim world.  One hundred years into gaining suffrage, the issue of whether or not a woman is “electable” to the office of presidency in the United States dominates the headlines.  But the rough political terrains have not stopped women from mobilizing and organizing in the Muslim world, and beyond.  At the threshold of the 21st century 47 Iranian women nominated themselves for president, knowing that they would be rejected by the all male political elite known as the Guardian Council, and Hillary Clinton was effectively bullied out of the election by Donald Trump in 2016. On the other hand, the waning yeas of the 20th century witnessed Megawati Sukarnoputri sworn in as the first Muslim woman president in Indonesia. It is not women’s “nature” that has kept them underdeveloped –politically and otherwise – but the weight of political dominance and misogynist religious/political ideologies and beliefs – be it from the Taliban or Trump. It has become patently obvious that women’s political participation is indispensable for meaningful development, and that women’s empowerment must be on the political, legal and social reform agendas, and not be limited to domestic violence and family planning policies. 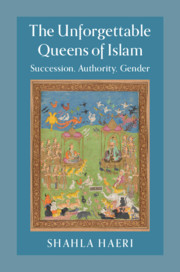 The Unforgettable Queens of Islam by Shahla Haeri

About the Author: Shahla Haeri

Shahla Haeri is Associate Professor of Anthropology and a former director of the Women's Studies Program at Boston University. She is the author of the pioneering ethnographic book Law of Desire: Temporary Marriage, Mut'a, in Iran (1989, 2014) on the unique Shi'a practice of temporary marriage in Iran and No Shame for the Sun: Lives of Professional...