Law and Order in the Economy: The End of a Paradigm and the Rebirth of an Old One

It started and ended in Chile! This might be the introductory sentence to an economic history of our times. After the 1973 military coup the “Chicago Boys”, a group of Chilean economists educated by Milton Friedman at University of Chicago, took control of Pinochet’s economic policy. A type of policy which later on entered government offices in the UK and the US together with Margaret Thatcher and Ronald Reagan. Today protesters on the streets of Santiago seeks to tear down the core pillars of the paradigm installed by the Chicago boys.
Looking at broader developments, the essential driver of change over the past four decades have however not been an economic one but rather a legal one. Or rather the essential change has been the economics discipline acting as an invasive species entering into the realm of law though the law and economics paradigm. Law and economics scholars apply micro-economic theory to the application of law.

The implication of the law and economics paradigm was that all social phenomena, including non-economic ones, can be observed through an economic lens and that they are considered to operate on an economic logic. De facto this development therefore implied a subjugation of law by economics, making economic rather than legal criteria the central principles guiding social exchanges.
With the introduction of New Public Management techniques in the public sector this development was complemented with an explicit anti-legalistic position where law was considered an obstacle, i.e. ‘red tape’, which prevent the unfolding of societal energies. If law is needed at all its purpose is to safeguard and ring-fence specific economic practices.
This development have provided the basis, as advanced over the course the last four decades, for a marketization of non-economic segments of society such as education, health and elderly care. Even if not privatised the combination of law and economics and new public management advances the restructuring of such domains according to market or market mimicking criteria.

The combined consequence of law and economics and new public management are now becoming increasingly clear through an erosion of the legal boundaries between the economic and non-economic segments of society and between private and public power. The systematic conflation of public and private interests of Silvio Berlusconi and Donald Trump are symbolic cases in point that the legal infrastructure of society is not what it once was.

It is on this background, that older theories might gain new prominence to the extent they are capable of serving as springboard for the development of a new paradigm. Two strands of legal theory, both originating from Germany, comes to mind:
The first one, ordoliberalism, associated with scholars such as Walter Eucken and Franz Böhm advocated a social-conservative macro theory of legal ordering in the economy. A coherent set of legal principles concerning competition and exchange and an isolation of the economic order from political interference were the central building blocks.
The second one is associated with scholars such as Herman Heller, Hugo Sinzheimer, Otto Kahn-Freund and Franz L. Neumann. They advocated from a social-democratic perspective a legal ordering of the economy through an elaborated labour constitution guiding relationships between employers and employees and between the economic and non-economic sectors of society.
The two strands, while differing on many accounts, agreed that the core problem was to secure a macro ordering of the economy based on law and the securing of a legal structuring of the relationship between the economic and non-economic sections of society. This again allowed for an institutional compromise between the two in the form of West-Germany’s famous post-WWII social market economy model as advocated by Alfred Müller-Armack.

One of many consequences was that competition law, i.e. antitrust, should not primarily be about welfare maximization, as advocated by law and economics. Rather the primary purpose of competition law is to ensure pluralism in society by preventing the concentration of resources and power in few hands.

So when the Bill Clinton campaign coined the phrase “The economy, stupid” back in in 1992 they were actually wrong. It seems they should have said “The law, stupid” instead.

About the research: The Law of Political Economy: Transformation in the Function of Law edited by Poul F. Kjaer gathers an exceptional cohort of scholars providing a novel conceptual framework for studying the role of law and legal instruments in political economy contexts. 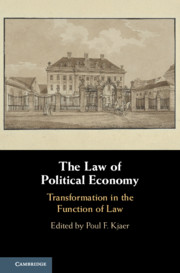 The Law of Political Economy by Poul F. Kjaer

About the Author: Poul F. Kjaer

Poul F. Kjaer is Professor of Governance and Sociology of Law, Department of Management, Politics and Philosophy, Copenhagen Business School, Denmark. His previous books includes Between Governing and Governance: On the Emergence, Function and Form of Europe's Post-national Constellation (2010) and Constitutionalism in the Global Realm: A Sociologi...