Irish Literature in Transition is a new series that tracks the the evolution of Irish writing from 1700 to the present, and I’m the editor of volume 5, which covers the four decades between 1940 and 1980. When I took on the task I knew this period was something of a challenge: ingrained ideas about Ireland’s culture at this time have often suggested it was a bit of a disappointment, lacking all the excitement of the Irish Literary Revival era and struggling against a punitive state censorship. Yeats was dead by 1939, Joyce by 1941, and while the rest of the world went to war, Ireland, which remained neutral, seemed to languish on the sidelines. But I also knew that behind this apparent stagnation there were many hidden stories, and I was confident that the twenty contributors to this volume would bring to light the vibrancy and dynamism of an Irish literature – in both the English and Irish languages — full of rich seams and new departures.

One thing that might surprise readers of this book is just how deeply Irish writing was connected to an international horizon, even under the restrictions of the wartime Emergency. Irish authors in this period were highly mobile; many of them travelled across Europe, lived and wrote home from elsewhere, or published their work abroad; others joined the long trail of Irish emigrants that left the country in the 1950s for Britain or America. And the literature they created bears the postmarks of that mobility, shaped by the currents and concerns of a global encounter. In fact, I think that during the years  between 1940 and 1980 Ireland began to produce a kind of ‘world’ literature. Even the most localised Irish stories or plays had a universal appeal for an audience that looked not just to Samuel Beckett, but to Edna O’Brien, Maeve Brennan or John McGahern, for comment on the human condition.

Another exciting aspect of this book is that it catches modern Irish culture in the process of building a strong and self-conscious critical tradition. As Irish literature evolved in the mid twentieth century it boosted particular genres, such as satirical poetry and realist drama, and expanded its reach through popular or ‘middlebrow’ fiction. But it also looked back at itself, in pioneering critical assessments, literary biographies, formative anthologies, and even educational curricula, all of which laid the foundations of modern Irish literary studies. At the same time, writers started to think more speculatively about their responsibility to Irish history or to changing concepts of class and sexuality, and to develop that distinct interventionist character that still defines Irish writing today.

After 1969, many writers also had to reflect again on the fragile definitions of Irish nationhood, with the Troubles in Northern Ireland straining the complex intersection of Irish writing with violence, bloodshed and grief. But these pressures weren’t really new: between 1940 and 1980, novelists, playwrights and poets on both sides of the Irish border were already looking for what Seamus Heaney described as ‘images and symbols adequate to our predicament’. Editing these essays, and thinking about the forty years of experience they cover, I came to appreciate the nuances of Heaney’s chosen word, ‘adequate’. When the literature of this period responds to the pressures and transitions of Irish life, it sometimes satisfies, sometimes dazzlingly over-reaches, and sometimes falls short. I think ‘adequate’ hints at this unevenness. And this is what makes Irish writing in this era – certainly for me, and I hope for readers of this book — so pleasingly unpredictable and also so compelling. 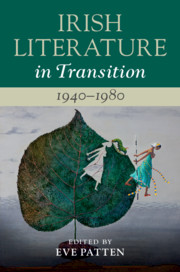 About the Author: Eve Patten

Eve Patten is Professor of English at Trinity College Dublin. She has published widely in nineteenth- and twentieth-century Irish and British literature. Her books include Samuel Ferguson and the Culture of Nineteenth-Century Ireland (2004), Imperial Refugee: Olivia Manning's Fictions of War (2012) and (co-edited with Aidan O'Malley) Ireland,...