Investing one fifth of the global arms budgets in a new world food system will end hunger everywhere – but also greatly increase prospects for world peace.

“At present humanity invests around 25 times more money in better ways to kill ourselves than we do in better ways to feed ourselves. That is not the description of a species with a long-term future on the Planet. It is time we reassessed our priorities if we intend to survive the 21st Century.”

“Currently the world spends $1.8 trillion on new weapons every single year – and the resulting wars cost us about $14 trillion annually,” Cribb says. “That means every individual is paying about $230 a year for engines of death, and $1750 for the conflicts they cause.

“If we continue on this path as global resources for living – including food – run down, it may become a death warrant for civilization.”

However, investing just 20 per cent of the global arms budget in securing the international food supply for everyone will not only end hunger – it will also remove one of the main causes of war, based on human behaviour in the past.
Food or War describes a new three-part food system, capable of feeding the whole of humanity, including poor countries, sustainably, cleanly and healthily – one that is largely climate-proof. Such a system could easily be established with $340bn redirected from weapons to ‘peace through food’.

“In the book I present overwhelming evidence that lack of food is a primary driver of the tensions that lead people to fight. If you assure the food supply, the chances of conflict are dramatically reduced. That has been shown time and again, in troubled areas all round the world. Also in the fact that there are no wars in regions of the Earth that are consistently well-fed such as North America, Western Europe and Oceania.

“Food must now be seen as the most affordable ‘weapon of peace’ available to humanity.”
Those who argue it is dangerous to cut weapons spending usually overlook that fact that between 1995 and 2010, world arms budgets did in fact decline by up to 40 per cent. Accompanying this was a reduction in deaths in all wars. “So we know from the recent past it is possible to reduce arms spending – and still have more peace.

“This proposal involves reallocating only half as much to a new form of peace-making – securing the food, land and water that sustain humanity and thus eliminating one of the key stresses that we know leads to war.”

Such a reallocation would enable farmers worldwide to adopt regenerative farming practices, that restore and repair rural landscapes, lock up large volumes of carbon in the soil to counter climate change and produce cleaner, healthier food for consumers from a system that is more resilient to climate and other shocks.

It will enable the mega-cities to feed themselves for the first time in history, by recycling all their wasted water and nutrients back into food through a range of innovative new food production systems and it will lay the foundations for a sustainable global aquaculture producing both fish and water plants in volumes sufficient to support 10 billion people in the hot world of the future.

“These are very exciting and promising development – but they will only come with the recognition that food is more important to the human future than weapons. A re-balancing of our spending on both is essential.”

“At present humanity invests around 25 times more money in better ways to kill ourselves than we do in better ways to feed ourselves. That is not the description of a species with a long-term future on the Planet. It is time we reassessed our priorities if we intend to survive the 21st Century.”

Food or war has been hailed by a number of leading military thinkers for offering positive, practical advice on ways to build a more peaceful, well-fed and sustainable world. 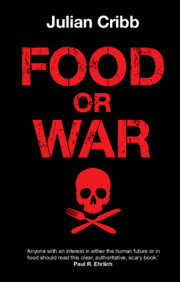