A story often buried – What shall we do about the increasing load of species dependent on humans for their existence?

Humans have long known that once a species goes extinct it is gone forever. There is a growing realization that the rate of human-caused extinctions is rising. One aspect of this gloomy picture is that the number of species that rely on human assistance to prevent their going extinct is also increasing precipitously. Are we up to the task of keeping such species alive? This is the challenge we address in Shepherding Nature. The Challenge of Conservation Reliance.

From around the world there are stories about how people have determined what failing species need to persist. An array of individuals, governments, and conservation organizations has engaged in creative ways to rescue endangered plants and animals. Their stories, both successes and failures, need to be told so we can better marshal human and financial resources and establish priorities for such “rescues”.

The stories most often related are quick successes touted by organizations seeking support for their efforts. This is understandable, but the result can be that money flows to a few iconic species while the more cryptic and less charismatic species quietly blink out. Enthusiasm for the long-haul efforts needed by species reliant on humans for habitat protection, captive breeding or propagation, or protection can wane quickly.

Take the case of the California Condor (featured on the cover of our book).  Heroic efforts involving captive breeding, provision of food (carcasses), biannual chelation to remove lead from their blood, protection of habitat, radio-tracking to monitor where they go, and reintroduction to places where they have been absent for centuries have allowed the species to regain a footing—but these efforts will need to continue for the foreseeable future or the investment in saving the species will have been for naught. How can we make sure these investments will continue? What other species will be lost in the interim for lack of attention?

What other species will be lost in the interim for lack of attention?

The condor is not unique. Most of the world’s imperiled plants and animals are conservation reliant, dependent on people to act as their shepherds. Some, like the giant panda, Chinook salmon, or white rhinoceros, are well known and attract conservation support, but many others are not and are too easily neglected. The list of conservation-reliant species is long and growing.

It is high time for humans to be transparent about costs, responsibilities, and commitments to conservation-reliant species. How can we prioritize such species, and how can we avoid wasting precious funds on species with no future?  There are no easy answers, but the first step is to recognize the magnitude of the challenges. Our book describes the challenges, often in the form of real-life stories of conservation successes and failures. 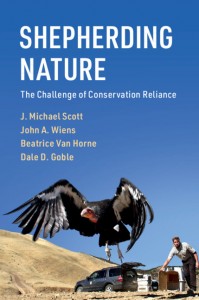 Michael Scott was a Research Biologist with the U.S. Fish and Wildlife Service for 37 years, leading research programs on forest birds of the Hawaiian islands and the California Condor. He served as Cooperative Fish and Wildlife Research Unit Leader and Professor of Wildlife at the University of Idaho, where he is an Emeritus Distinguished Professor. His research has emphasized conservation, endangered-species policy, and landscape ecology. His publications include two co-edited books on The Endangered Species Act at 30 (2006) and co-author of Forest Bird Communities of the Hawaiian Islands. Their Dynamics, Ecology, and Conservation (2009).

John A. Wiens is an Emeritus University Distinguished Professor at Colorado State University and an Adjunct Professor at the University of Western Australia. After 36 years in academia, he served for 6 years as Lead/Chief Scientist with The Nature Conservancy and then for 4 years as Chief Scientist with PRBO Conservation Science in California. His research on landscape ecology, conservation, and the ecology of birds has led to many publications, including Historical Environmental Variation in Conservation and Natural Resource Management (co-editor, 2012) and Ecological Challenges and Conservation Conundrums. Essays and Reflections for a Changing World (sole author, 2016).

Beatrice Van Horne was a professor for 17 years at Colorado State University, where her research focused on population biology of terrestrial vertebrates. Subsequently she was a National Program Leader in areas related to wildlife, fisheries, climate change, and forest fire for the U. S. Forest Service and the U.S. Geological Survey. Most recently she led the Northwest Climate Hub for the Department of Agriculture. Among her publications is the co-edited People, Forests, and Change. Lessons from the Pacific Northwest (2017).

Dale D. Goble obtained a law degree from the University of Oregon. After serving as a policy advisor for the U.S. Department of the Interior, he joined the Law Faculty of the University of Idaho, where he is an Emeritus University Distinguished Professor and the Margaret Wilson Schimke Distinguished Professor. He has specialized in wildlife and natural resources law and the U.S. Endangered Species Act. He has co-edited The Endangered Species Act at 30 (2006) and Wildlife Law. Cases and Materials (2017) and is co-author of Wildlife Law (2010).

About the Author: Beatrice Van Horne

Beatrice Van Horne was a professor for 17 years at Colorado State University, where her research focused on population biology of terrestrial vertebrates. Subsequently she was a National Program Leader in areas related to wildlife, fisheries, climate change, and forest fire for the U. S. Forest Service and the U.S. Geological Survey. Most recently ...