Imagine. It’s 1965, you’re at home in on Prenzlauer Berg, the Berlin Wall is visible from your window, and you’re having friends over to your flat. Someone brings the latest Thelonious Monk record, smuggled across the border from the West, and everyone gathers round in excitement. You could go to jail for this, you realize—after all, jazz is Amerikanische Musik, is verboten in East Germany! But thumbing your nose at the authorities, you and your comrades drop the needle into place.

It’s a nice picture—jazz as underground art form, jazz as resistance movement—but it’s not entirely true. In fact, in many ways, it’s not true at all.

As a native of Germany, I had long heard stories of people on both sides of the wall listening to jazz. In A People’s Music: Jazz in East Germany 1945-1990, I wanted to explore these stories, which led me to dig deep into the myths and realities of the jazz scene in communist Germany. Many scholars claim that jazz was an art form arising directly in opposition to state ideology: in fact, I found that in the communist worldview, jazz was understood as “a music of the people,” and therefore enjoyed fundamental ideological accordance with Marxist cultural politics.

In the Anglophone world, the historiography of jazz in the Cold War is largely one-sided, with scholars examining jazz primarily from a Western perspective. A People’s Music fleshes out this story by looking at jazz from the Communist side, detailing how Soviet policymakers adopted jazz as early as the 1920s, long before Western authorities incorporated it into cultural statecraft and diplomacy. In fact, during my research I found that this supposedly ‘underground’ genre became a central tool of the socialist postwar agenda to reeducate the German populace, with Soviet radio broadcasting jazz even over the smoking rubble of Berlin.

Now, this is not to say that over the subsequent decades of the German Democratic Republic (GDR), jazz flourished free of state repression. Far from it. The state security apparatus, the STASI, took a special interest in just how this Western music was crossing the Iron Curtain, and what impact it had on the hearts and minds of East Germans. Indeed, with STASI informants embedded deep within the jazz scene – informants I was able to interview  for the book – jazz music was controlled at varying times and in various ways, making the history of jazz in the GDR a complex story.

A People’s Music charts the reception of jazz in East Germany decade by decade, such as in the 1960s when the music gained new status as a genre fully in-line with Germanic musical heritage. But politics was never far: one key moment was Louis Armstrong’s 1965 tour of the GDR, taken at the time of the Selma to Montgomery march, and used by socialist leaders to challenge American racial policies of the time. Later, in the 1970s and 1980s, party officials used jazz to represent a progressive socialist Germany both at home and abroad: at home, at its first national jazz festival in Weimar, and abroad, by sending its musicians onto international stages.

Hardly just an ‘underground’ genre, the portrait of jazz that emerges in this book is one of numerous exchanges between citizens, musicians, and political officials over forty years. Throughout the lifespan of East Germany, jazz musicians, writers, and impresarios were able to pursue illustrious careers, enjoying extraordinary privileges and, in many cases, even acting as emblems of the state. I was privileged to tell this remarkable story for the first time. 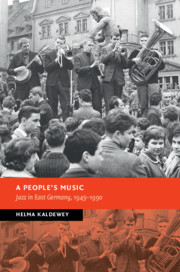 A People’s Music by Helma Kaldewey

About the Author: Helma Kaldewey

Helma Kaldewey received her Ph.D. from Tulane University, Louisiana. She is a musicologist, longtime teacher and researcher in the history of jazz. She has written and produced films about New Orleans' music culture in partnership with German public media....