“Photonics” – try asking Google what this is and you’ll find a variety of answers, some more enlightening (pardon the almost inevitable pun…) than others.  But what is photonics?  Why is it interesting?
Well, it all seems to have something to do with light…

The latter question – ‘Why is it interesting?’ – is simpler to answer.  We all see light and are all too well aware of its emotional and physical impact on our lives.  This has been known for centuries.  We get sunburnt thanks to light in the ultraviolet – which we can’t actually see but which certainly makes its presence felt.  But light has broader impacts – we have taken photographs for approaching 200 years and Henry Fox Talbot started the ‘develop and print’ approach around 1835.  The concept of the lens goes back to around 750BC!  So light has had a significant impact on our lives for millennia.

Perspectives on ‘what is light and how do we understand it?’ have evolved over the centuries.  The idea of ‘light rays’ travelling in straight lines until they hit some other transparent object (air to glass is the most familiar) and thereafter travelling in a different straight line direction inspired the early lenses.  Then ‘waves’ emerged – like those on water – to provide insight towards the latter half of the 17th century, explaining the multiple colours of thin films of oil on water.  And giving insight into why light hitting a sharp edge in air can appear to go round corners – you sometime see similar effects when dropping a pebble in water.  These two approaches jointly enabled the design and understanding of a wide range of optical phenomena and useful systems – cameras, microscopes, telescopes, filament light bulbs, even enabling Logie Baird’s television.

But there were still some mysteries – why do different substances burn with different colours?  The yellow when salt scatters into a flame is most familiar.  So we evolved into ‘photonics’ and the idea of the photon – the particle of light – towards the early part of the 20th century.  Einstein is credited with conceiving the idea.  This explained the yellow glow from salt in terms of atomic energy levels being excited by the heat and released as specific colours – particles of light.  Then, towards the end of the last century it became more and more apparent that light was going to be seriously exploited.  So an all embracing term to encompass this idea of the photon – but also the ideas of waves and rays – and even, the thought that sometimes light in conductors may flow (a minute distance but far enough to be very interesting) as electrons!

Hence ‘photonics’ began to filter into the technical vocabulary, but has yet to follow ‘electronics’ into everyday familiarity.  However, we are all familiar with its ramifications.  Digital photography (enabled by photonics exciting electric current in semiconductors) has virtually taken over completely from film.  Any compact disc player relies on a laser for its operation.  Optical fibre communications are an essential enabler for the ubiquitous internet.  Then we have laser surgery, even the dentists’ dreaded drill now in a less painful (though still more expensive) option, laser created artefacts in glassware…  The list is ever expanding!

So – where does my new book ‘Introducing Photonics’ come into play?  The aspiration is to facilitate the essential intuitive insight into thinking about photonic phenomena and the ever expanding applications spectrum.  We have the photon, the electromagnetic wave, the ray and even the electric current.  So what is light?   Electronics is a constant reminder of the electron – the basic particle of electricity.  However to understand and design in electronics we subconsciously utilise various concepts – electric currents, electromagnetic waves and more.  We’re comfortable with switching instinctively among these to understand a particular technical situation.  With ‘Introducing Photonics’ my aspiration is to facilitate this same intuitive understanding. 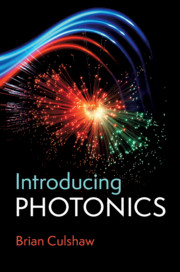 About the Author: Brian Culshaw

Brian Culshaw is an Emeritus Professor of Optoelectronics at University of Strathclyde, having previously served as the Head of Department and Vice Dean. He is also a Director of OptoSci Ltd, and was the 2007 President of the International Society for Optics and Photonics (SPIE)....