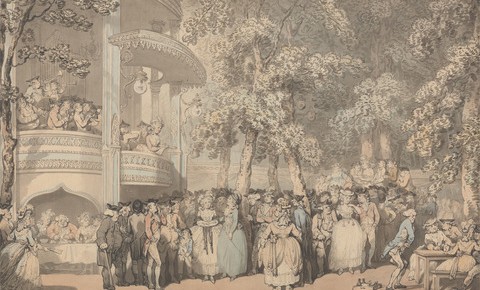 What can musical benefits tell us about the ecology of performance in eighteenth-century Britain? Why did musical benefits become such an integral part of a performer’s work in the eighteenth century? How similar were benefits for performers to those for charities? What did musical benefits look like across Britain, in comparison with those in London? What was the audience’s role in shaping the benefit? These were some of the questions that first inspired us to pursue the subject in the essay collection, Music and the Benefit Performance in Eighteenth-Century Britain. In the summer of 2014, we both attended the International Conference on Baroque Music in Salzburg, Austria and met for the first time. The conference is a great place to meet colleagues and exchange ideas on seventeenth and eighteenth century music, and it was over coffee that we had the idea for a collection of essays on the musical benefit, which although an important part of musical life in eighteenth-century Britain, had not received extended scholarly attention. Over the next six years, we solicited essays from a remarkable group of musicologists; we assembled the book, and edited it; and now the book is published.

Today, musical benefits are known more as vehicles for pop stars to raise money for specific kinds of charities – FarmAid, LiveAid, and other popular music festivals have been focused on charity donations since the 1980s. But the benefit originated not as charity events in the altruistic sense; instead, they arose out of the late seventeenth-century British spoken theatre, as a way for playwrights to reap profits from successful plays. On the ‘author’s night’, usually the third evening during a play’s run, the playwright would take home the profits made that evening. Quickly, the idea of profiting from a single evening’s performance also began to emerge for actors and actresses. By the time musicians caught on to the idea, it was the early eighteenth century, and both singers and instrumentalists started to give special concerts for which they would receive all of the profits.

Our book explores these benefit concerts from several different angles. The first four chapters (by Kathryn Lowerre, Olive Baldwin and Thelma Wilson, Robert Rawson, and Vanessa Rogers) discuss the benefit performance from a practical point of view. These chapters illuminate the financial aspects of these productions, the types of repertoire that musicians sang and played on benefits, and how beneficiaries marketed these special events. Benefits in the early eighteenth century came in the form of both concerts and special productions of opera. The next two chapters (by Roz Southey and Stefanie Acquavella-Rauch) look at benefit performances outside of London, specifically in the north of England, and in Edinburgh. Amanda Eubanks Winkler and Alison DeSimone consider the public image of benefit performances, assessing the changes that occurred around the turn of the eighteenth century, especially in connection with the arrival of Italian opera in London. The fourth part of the book (with chapters by Tríona O’Hanlon and Matthew Gardner) looks at charity benefits in Dublin and London and their connection to the new fashionable interest in philanthropy. Finally, two chapters by John Irving and David Hunter approach the role of the audience in the success of benefit performances in London, as well as returning to the question of who benefits, which we hope the book begins to answer. 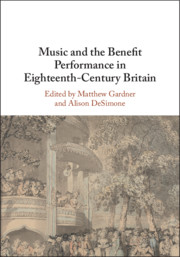 About the Author: Alison DeSimone

Alison DeSimone is Assistant Professor of Musicology at the University of Missouri, Kansas City. A recent publication, 'Equally Charming, Equally Too Great: Female Rivalry, Politics, and Opera in Early Eighteenth-Century London' in the Early Modern Women: An Interdisciplinary Journal won the 2018 Ruth Solie Prize for an Outstanding Article on Briti...

About the Author: Matthew Gardner

Matthew Gardner holds a Junior Professorship in Musicology at the Eberhard-Karls-Universität Tübingen, Germany in association with the Akademie der Wissenschaften und der Literatur Mainz. He has published widely on Handel and his English contemporaries, including Handel and Maurice Greene's Circle at the Apollo Academy: The Music and Intellectual...