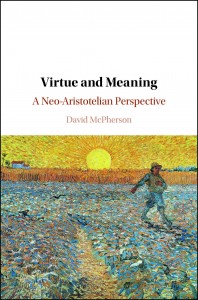 Aristotle said that philosophy begins with wonder, but I would add that it often also begins with dissatisfaction. This is true of my new book Virtue and Meaning: A Neo-Aristotelian Perspective (Cambridge University Press, 2020).

I have been drawn to the Aristotelian tradition of virtue ethics and find much that is congenial in the revival of this tradition in the last half-century or so. However, I have also been dissatisfied with a flatness in the dominant approach. It emphasizes an observational (or disengaged) standpoint rather than a participative (or engaged) standpoint, as seen in the stress it puts on an analogy between human flourishing and the flourishing of other living things, and thereby it overlooks many of the meanings by which we live and after which we seek. In other words, the dominant approach fails to account properly for our distinctive nature as the meaning-seeking animal. It has thus offered an overly disenchanted understanding of our human form of life.

My book seeks to overcome this constriction and argues for a re-enchanted Aristotelian perspective; that is, it aims to give better recognition to the meanings by which we live and after which we seek. In particular, I seek to show how our human form of life is shaped by strong evaluative meaning, that is, meaning or value that involves qualitative distinction and specifies that with which we ought to be concerned and toward which we ought to orient our lives: for example, the higher, the noble, and the sacred.

My first step toward re-enchantment involves countering the disenchanting move – made by those who adopt the dominant approach – of denying any special realm of obligation. I argue that the whole realm of strong evaluative meaning is such a special realm of obligation. I also seek to re-enchant our conception of happiness such that it can be understood as a normatively higher, nobler, more meaningful mode of life that is constituted by virtuous activity and which can enable us to address the problem of loss in human life. Further, I seek to re-enchant our understanding of the requirements of other-regarding concern by giving proper recognition to special inherent dignity and sanctity of human life – which the dominant approach fails to do –  and I seek to show how this enables us to regard all human beings as fully amongst us, to affirm moral absolutes, and to respond properly to the demands of universal and particular concern.

I also seek re-enchantment by arguing against “quietist” approaches that attempt to remain content with the meanings that arise for us within a particular form of life without articulating any cosmic outlook that can make sense of these meanings. In other words, I seek to show how an account of strong evaluative meaning in life and a meaningful life needs to be connected with an account of the meaning of life, that is, an account of how our lives fit into the grand scheme of things in light of a cosmic or ultimate source of meaning to which we must align our lives. Finally, I seek re-enchantment through articulating and defending the importance of spirituality in the good life, which includes recovering an integral role for contemplation and showing the attractions of a specifically theistic form of spirituality.

In sum, I endeavor to articulate and defend the most re-enchanted perspective that seems to be a live option. If we are not able to affirm such a perspective, then I think this would constitute a significant loss, precisely because we are the meaning-seeking animal.

Virtue and Meaning: A Neo-Aristotelian Perspective by David McPherson is available to buy.