The Art of Acting: What Performers Owe to Antiquity

Acting is an elusive art, because – unlike for example a painting, sculpture, poem or score – an actor’s performance cannot be held in the hand, and is not available to pin down for scientific analysis. Yet it is an art, like the art of playing the piano. In the language of the ancients, acting is an ars or a techne, which is to say a technique or methodology. It is my contention that the art of stage acting owes a huge debt to antiquity, like architecture, playwriting, and so many other culturally significant art forms. My book aims to correct the common idea that serious discussion of acting as an art began only in the 20th century with Stanislavski. I contend that stage acting was long seen as a branch of rhetoric, and rhetoric was understood until recent times as a mode of oral performance. The rhetorical works of antiquity provided a language and a set of concepts, now unfamiliar, which from the Renaissance onward stimulated serious discussion and argument about the nature of acting.

My title alludes to Hamlet, where in the context of a prince who cannot take political action, Shakespeare examines the nature of stage acting. I argue that Hamlet’s famous advice to the players articulates the mindset of an intellectual, and flies in the face of professional practice – hence the title of my book, where my purpose is to unpack the lost voice of the professional actor, effaced in our historical sources, which tend to privilege the voice of the intellectual. My book addresses stage acting not only in England but also in France and in 18th-century Germany, seeking to establish how actors as distinct from intellectuals conceived and practiced their craft.

I range across three major topics: the analysis of emotion or ‘the passions’, which was always the foundation for shaping a performance; declamation, which was always connected to the breath, and thereby to the body and to feeling; and gesture, those movements of the hands and body which arise instinctively when human beings speak, and which actors need to shape in order to achieve the maximum power and clarity.

Over the ages, actors and philosophers have been united in their preoccupation with understanding the mind/body relationship. Modern neurological science has forced us to interrogate that relationship afresh, and old ideas about selfhood derived from romanticism and modernism seem increasingly insecure. In this context it is particularly helpful to go back to antiquity, which has so often served over the centuries as a source of cultural renewal. Classical acting matters also to the debate about liveness, as theatre seeks to repurpose itself in relation to film and media. The purpose of classical acting was not to explore psychological inwardness but to engage with a civic community, and we have much to learn from returning to that premise. 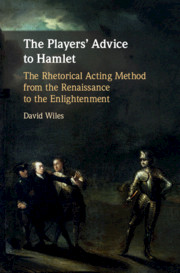 The Players’ Advice to Hamlet by David Wiles

About the Author: David Wiles

David Wiles is Emeritus Professor of Drama at the University of Exeter. A British theatre historian, he specialises in classical and early modern theatre and has spent his career in departments of drama, where his teaching has always engaged with practice. His research interests include performance space and time, mask, acting and citizenship. This...