It was a decade ago in graduate school when I read Shahla Haeri’s magnificent book, Law of Desire, for the first time. Haeri’s book became the inspiration for a series of papers, conference presentations, and ultimately this book. Temporary Marriage in Iran: Gender and Body Politics in Modern Iranian Film and Literature emerged out of my desire to give voice to the underdog. In fact, this has been my mission throughout my life; perhaps because as a woman, and an Armenian one, in a majority Muslim Iran, I found myself being the underdog frequently. In this book, I study temporary marriage in Iran not just as an institution but also as a set of practices, identities, and meanings that have transformed over the course of the twentieth and twenty-first centuries. Analyzing select literary works of the Pahlavi era (1925-1979) and select films from the Islamic Republic (1979-), I explore the representation of sigheh women, or those who entered into temporary marriages by questioning the ways that sexuality works as a form of political analysis and power, revealing how a sigheh woman’s sexual bodily autonomy is used as ammunition against what governments deem inappropriate gendered expression. Focusing on the intersections of gender and other societal constructs broadens the scope of what is studied in regards to body politics, formal and informal marriages, and sex work in modern Iranian literature and film, as well as the processes of nation-building and modernization, among others. Questioning how the body is used as a battlefield for power gives me room to analyze the fluidity of inclusion and privilege, and conversely, ostracism and marginalization. How do societies decide who is, or who is not, included in society? How should the state approach its response to the growing unanswered political demands of the bodies that cannot, or will not, remain within normative boundaries? How do physical representations of difference inform power dynamics? When bodies are policed and regulated, does that impact society? How so? In what ways do those bodies that transgress normative boundaries and state boundaries challenge power relations on the national stage? What role do moral perspectives and virtues play in society’ s regulation and protection of bodies? In that sense, my analysis examines the figure of the sigheh woman as the abject sexual other. Because bodies are the bedrock upon which societies stand, exploring how and why women’ s bodies – including those of sigheh women characters – engage with the state and society is critical to our understanding of what constitutes a transgressing body; how that body is excluded, marginalized, or threatened; how is it that social and moral norms inform political attitudes toward that body; and how does that body threaten normative narratives. Thus, in this book, I am concerned about issues such as sigheh women’s status in Iranian society, their alleged deviation from the mainstream, and their ultimate liminality and simultaneous hypervisibility within the cultural productions. Contrary to the stereotypical views of sigheh women as invisible and liminal figures, I illustrate that sigheh female characters often defy categorization. While they live on the margins of society, these female characters also occupy a significant space in the social imaginary of the dominant culture. In my analysis, this social position speaks to sigheh women’s symbolic and sexual power. By focusing on sigheh, I demonstrate how the female body has been politicized historically and has become the catalyst for a symbolic struggle between the social, cultural, religious, and sexual forces that define modern Iranian womanhood. 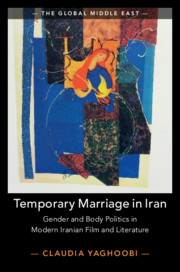 About the Author: Claudia Yaghoobi

Claudia Yaghoobi is Roshan Institute Assistant Professor in Persian Studies at the University of North Carolina, Chapel Hill. She is the author of Subjectivity in 'Attar, Persian Sufism, and European Mysticism (2017), co-editor of Sex and Marriage in the Medieval Islamicate World: Women, Family, and Love (with Aisha Musa, forthcoming), co-editor of...