In the Shadow of Leviathan

Thomas Hobbes was old enough to have been John Locke’s grandfather, but thanks to his extreme longevity, the two great Anglo-phone philosophers were alive as contemporaries for nearly five decades. For about a year during the tumult following the execution of King Charles I, Locke was a student at the Westminster School, a few kilometers from Hobbes’s rooms on Fetter Lane in London.  Years later, for a longer period, Hobbes and Locke were virtual neighbors. They lived in the town mansions of their titled patrons: Hobbes’s with the earl of Devonshire in Little Salisbury House on the south side of the Strand; Locke with the earl of Shaftesbury in Exeter House, across the street.

Hobbes and Locke moved in the same circles, had dozens of common associates, and pursued closely related intellectual projects. Their famous political theories share strikingly similar features, including devices such as the state of nature and natural rights.

Did they ever meet? It seems likely, but we aren’t certain. The most suggestive evidence is a letter of 1674, in which Hobbes’s friend John Aubrey urged Locke to borrow and read some of Hobbes’s manuscripts. He also told Locke that Hobbes was “strangely vigorous” for a man of 85, and would take “kindly” to a visit.

Tantalizing though the possibilities are, any personal interactions between Hobbes and Locke have been lost to history. What we can recover is the intellectual link between the two. In the Shadow of Leviathan: John Locke and the Politics of Conscience investigates that question: how did John Locke read Thomas Hobbes? How did Hobbes’s writing influence Locke, positively or negatively? This has been a strangely neglected historical problem, partly because it has been fashionable for decades to avoid the assumption that “great minds” of the “canon” necessarily conversed with one another. It is also true that Locke, when accused of Hobbism (as he often was), tended to disown any influence.

But beneath all of this hesitation and misdirection a fascinating (if scattered) archive survives, and suggests John Locke’s serious engagement with Hobbes. My book draws this material together, and tells the story of Locke’s intellectual maturation “in the shadow of Leviathan”.

The evidence comes in various forms: reading notes from Locke’s university days, when Leviathan was a freshly published sensation; an account by one of Locke’s closest associates of his constant study of Leviathan; unpublished manuscripts in which Locke invoked Hobbes’s name. In journals that Locke wrote during his year in France we find short but rich characterizations of Hobbes’s philosophy.  In flyleafs of unrelated books Locke copied passages from Leviathan. We even find Hobbes’s unorthodox scriptural interpretations inscribed in Locke’s Bible. And then there is Locke’s massive library, which was full of works by Hobbes, and works written to counter his influence.

This source material has languished unstudied. My book contextualizes these sources and finds in them a thematically consistent story. Locke did not primarily read Hobbes as a monarchist, or as a constitutional absolutist. He was chiefly engaged by the implications of Hobbism as regarded the heated contemporary debates surrounding religious governance and religious freedom. In this context, Locke grappled with a Hobbes that is unfamiliar to most modern readers: a Hobbes who contemporaries understood not as an advocate of spiritual coercion and uniformity, but one who attacked the clergy and promoted a certain toleration of religious dissent.

Locke’s reactions to Hobbism evolved in this context. An early sympathy with Hobbes’s politique tolerationism slowly melted away, and Locke was obliged to develop his own, more robust understanding of conscience freedom. What emerges is not the familiar notion of a “liberal” Locke repudiating an “absolutist” Hobbes. Locke and Hobbes instead appear as common participants in the tradition of natural rights thinking that would closely inform later liberalism. They also emerge, within that tradition, as defenders of toleration.  Locke’s historic understanding of religious freedom as an inalienable right developed as he freed himself from Hobbes’s more politique account of toleration as a governing strategy and a gift of sovereignty.  Both versions of religious freedom, I argue, persist in the later liberal tradition. The history of Locke’s relationship with Hobbes thus illuminates a significant theoretical tension in modern liberal societies. 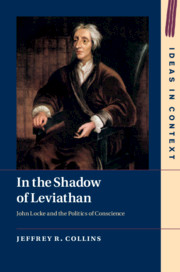 In the Shadow of Leviathan by Jeffrey R. Collins

About the Author: Jeffrey R. Collins

Jeffrey R. Collins is Associate Professor of History at Queen's University, Canada. He is the author of The Allegiance of Thomas Hobbes (2005) and numerous articles on modern religion and political thought in journals such as Modern Intellectual History and the Journal of Modern History. He is also a regular book reviewer for the Wall Street Journa...