Bullies and the 2020 Election

I don’t know who will win the 2020 presidential race, but I do know who will lose: the biggest bully on the block since Billy Franklin beat-up Joey Tarnower in the sixth-grade and ran-off with his lunch money.  The American people, I argue, are sick of political bullying and they’re going to put a stop to it.  But here’s the problem: They don’t agree on who the bully is or whose milk money has been filched.  Nevertheless, they’re on the prowl.

Thus far, bullying hasn’t figured into the national dialogue on the 2020 race.  Instead, observers feature long-standing predictors like the national economy.  On that score, Donald Trump looks good, with a rising Dow, low interest rates, and an unemployment rate of 3.5%.  Trump may be a ham-handed diplomat and he may have been hoisted on the petard of impeachment but Johnny’s dad still has a job and the Master Card bills are slowly getting paid.

Some observers question that logic, noting that Johnny’s dad may well be working two jobs and Johnny’s mom another 30 hours.  “We moved a billionaire into the White House,” such voters complain, “and he’s ignoring a shameful income inequality now thirty years in the making.”  Bernie Sanders may be quirky, they reason, but he understands Main Street America.

Others in the predicting business are focusing not on economics but on changing demographic trends: declining population in ruby-red rural areas and growing Democratic cadres in the nation’s cities; blue-collar workers in the industrial Midwest who went with Trump in 2016 but who live in daily fear of an increasingly global economy; national decline in church-going, rising environmental consciousness among the nation’s youth, and an increasing gender-divide between the two major parties.

All of these factors are no doubt important but so are the bullies.  They come in two varieties.  Republicans, for example, feel beaten-down by the barrage against Trump which, they reason, is an assault on their very selves.  “Watch MSNBC,” they declare, “or any of the networks, and you’ll see Trump voters portrayed as ignorant retrogrades – simplistic, racist, sexist, xenophobic.”  “I never see anyone like me on television,” they declare.  “If you see a Trump supporter you see buffoons with rifles and swastikas.  These aren’t people like me but who cares? who’s listening?  I’ve been turned into a Saturday Night Live caricature.”

For Republicans, the bullies include journalists, academics, the Hollywood elite, and Nancy Pelosi, people well separated from the lives they live, places where folks go to church, pay their taxes, and help out when the floods hit.  “The President never catches a break,” they observe, “it’s just one smarmy hit after another.”  “Look at how they laugh at his family,” his supporters complain.  “It’s like they’re laughing at my family too.  Even the champion ballplayers won’t come to the Oval Office to meet the President.  The bullying never ends.” 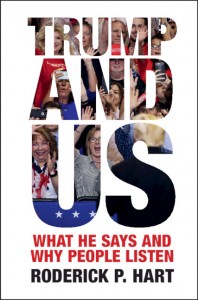 “Really? Seriously?” the anti-Trumpers respond.  “Donald Trump is the biggest bully ever to have set-up shop in the White House.”  “His whole life has been about bullying – denigrating foreigners, making fun of the handicapped, treating women like objects, diminishing pols like Liz Warren and Marco Rubio with his mindless epithets.” “And to what end?” they ask.  “He’s supposed to be the leader of the nation and all he does is make fun of people on Twitter and then rub salt into the wounds he creates.”  “True evil,” they note,” is when someone attacks someone else for the pleasure evil provides.  That’s Donald Trump.”

Political scientists highlight the unprecedented amount of political polarization in the United States these days but that observation doesn’t go far enough.  Political polarization sounds, well, too political.  Far more dangerous, I believe, are the emotional gaps opened-up since 2016 among everyday Americans.  Voters will vote in record numbers in 2020, I predict, and they will do so for deeply personal reasons – because Lorne Michaels has treated them like idiots or because Sean Hannity has treated them like traitors.  Revulsion against the bully president will drive his detractors to the polls; CNN will do its part by turning-out revengeful Trumpers.  It won’t feel good to vote in 2020 but it will feel justified – deeply, personally justified.  Anger, if not rage, will determine the election outcome.  After that, the American people must find a way to abandon their antipathies and get along with one another in the government they have formed, in the nation they have inherited.  A bully thought, that.

About the Author: Roderick P. Hart