Are Trump’s Tweets Unpresidential? – Often Yes, but Sometimes No

It’s no secret that Donald Trump loves Twitter. Since becoming president, Trump has tweeted more than 14,000 times. During the first days of his impeachment hearing, President Trump tweeted at a record breaking pace, releasing 142 tweets on a single day.

Even the most cursory reading of Trump’s tweets demonstrates that many of them qualify – by almost any reasonable standard – as unpresidential. For example, in his tweets, Trump has called the media “enemies of the people,” used racial slurs to refer to his political opponents, and has regularly spread misinformation to the American public, including both acknowledging and denying Russian interference in the 2016 presidential election.

As political scientists who care deeply about the health of American democracy, we find President Trump’s use of Twitter intriguing.

This led us to research a particularly sensitive aspect of President Trump’s use of Twitter – his interactions with the judiciary. These tweets afford the president the opportunity to appear presidential by sharing his views on court decisions, the Constitution, and other legal affairs. Moreover, they are official presidential communications, illustrating that a thorough appreciation of the Trump Administration’s relationship with the judiciary requires us to consider presidential tweets alongside more traditional speeches. 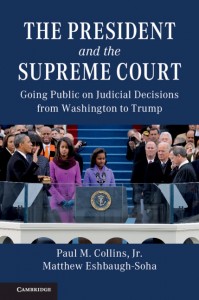 President Trump’s use of Twitter also sheds light on how the president views the norm of judicial independence, a keystone of American democracy. It holds that judges should be free to make their decisions without being influenced by political interests, including the president. The idea is that, in order to be fair and impartial, it is inappropriate for presidents and other actors to pressure judges to rule in a particular way. If we allowed this, judges would become little more than pawns in a partisan game, which could undermine faith in our justice system, and potentially in our entire system of government.

Yet, our work shows that, throughout American history, presidents use their public rhetoric to criticize judges, and have even put pressure on judges to rule in a particular way on cases before the Supreme Court. For example, President Obama set off a firestorm of debate when he argued that it should be an “easy decision” for the Supreme Court to uphold the constitutionality of his signature policy achievement, the Patient Protection and Affordable Care Act (aka Obamacare).

President Trump’s tweets fit into the broader picture of presidential relations with the courts in two ways. On the one hand, his rhetoric toward judges has been controversial and combative. Among other things, President Trump has used his tweets to refer to federal court judges as “slow and political,” and went so far as to call a federal court judge who blocked the enforcement of his travel ban a “so called judge.” Judge Robart would go on to receive more than 100 death threats following the president’s tweet. These are hardly actions one would describe as presidential.

On the other hand, President Trump has used Twitter to engage the judicial branch in a more reasoned manner. For example, in response to a Supreme Court ruling that the Immigration and Nationality Act’s provision related to crimes of violence is unconstitutionally vague, President Trump released a relatively typical presidential statement via Twitter: “Today’s Court decision means that Congress must close loopholes that block the removal of dangerous criminal aliens, including aggravated felons. This is a public safety crisis that can only be fixed by Congress – House and Senate must quickly pass a legislative fix to ensure violent criminal aliens can be removed from our society. Keep America Safe!”

Setting aside the campaign-like rhetoric of “Keep America Safe!,” our research dating from Washington to Trump shows this is a fairly typical presidential response when a president disagrees with a Supreme Court decision. Indeed, we have documented hundreds of examples where presidents have called on Congress to take action to redress what they view as flaws in the Supreme Court’s decisions.

This, we believe, is healthy to American democracy. As the head of a coequal branch of government, presidents should certainly be able to call on Congress, or the American public, to oppose or support judicial decisions.

What sets President Trump apart from previous presidents is the vitriol with which he ties to do this in a large number of his tweets. It’s one thing to assert the power of the office of the president to engage in a dialogue with the other branches of government about constitutional meaning. It’s an entirely other thing to put judges lives at risk when doing so.

About the Author: Matthew Eshbaugh-Soha