Trump and Iran Go Back Years

We do not yet know whether President Trump’s killing of Qassim Suleimani, Iran’s second most powerful leader, will prove to be a masterstroke or a disaster. The president’s antipathy toward the Islamic Republic is easier to discern. Its roots lie in the Cold War. Trump may have been acting on short-term intelligence in targeting the general, but he was fulfilling a long-term ambition, present arguably since he was in his early 30s. I trace this in my new book, In the Shadow of the Cold War: American Foreign Policy from George Bush Sr to Donald Trump (Cambridge, 2020).

Trump’s approach to Iran can, of course, be framed as thoroughly anti-Obama. His abandonment of the Iran nuclear deal was as clear a refutation of Obama’s purported ‘appeasement’ of Tehran as Trump could make. He also reasoned that he could win more favour from (and arms contracts with) Saudi Arabia, Iran’s great regional opponent, by destabilizing the regime in Tehran.

But Trump‘s approach to Iran also has an important Cold War genesis. As president, he determined to make the regime his chief international nemesis. He had not plucked Tehran from the air. As a 33-year-old, Trump watched with dismay the 1979-81 humiliation of the United States and its hapless president, Jimmy Carter. Suleimani, then in his early 20s, joined the Islamic Revolutionary Guards Corps, a part of the new regime that gloried in the taking of American hostages.

As Charlie Laderman and Brendan Simms observe, ‘Like so many Americans of his generation, Trump’s world view was shaped by the trauma of the [1979 Iran] hostage crisis and the sense of U.S. decline in the late 1970s and 1980s.’ Stephen Metcalf is writing a book which extends this argument: ‘Donald Trump Is a Hostage to 1979,’ he writes.

There is a compelling argument that one of Trump’s key strategic ambitions was to redress this long-standing grievance – against Carter and against the Iranian regime. The cancellation of the Iran nuclear deal was not ordered only to repudiate his Carterish predecessor – though there is some of that too. Rather, it was the articulation of a 40-year old grudge. Trump’s Iran policy is positively basking in the Cold War’s shadow.

His method of redress also shared something of the original episode. Both Carter and Trump chose, over significant resistance from some of their advisors, to use stealth airpower to strike at Iran. Carter’s attempt to rescue the 52 US hostages by helicopter ended disastrously in the Tabas desert. But technology favoured Trump, allowing him to kill Suleimani by a drone strike.

Jimmy Carter’s presidency became consumed with forging a covert diplomatic channel that would move the new regime away from its public anti-Americanism. It foundered not just in the desert in April 1980 – when U.S. rescue aircraft crashed en route to the embassy – but in the complexities of diplomacy in a moment of revolutionary turmoil. Trump has been determined to not repeat these mistakes.

It would be ironic indeed was Trump’s Iran policy, in contradistinction to Carter’s, to end up fomenting a revolutionary wave that would do away with the regime Qassim Suleimani so ably served. 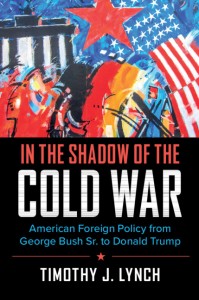 In the Shadow of the Cold War by Timothy J. Lynch

About the Author: Timothy J Lynch

Timothy J. Lynch is Associate Professor in American Politics at the University of Melbourne. He is an award-winning author and editor of several important books on American foreign policy, including the two-volume The Oxford Encyclopedia of American Military and Diplomatic History (2013)....