As an awe-struck adolescent in attendance at the 1962 Pittsburgh Annual Conference of the African Methodist Episcopal Church, I saw Bishop Richard R. Wright, Jr., a scholarly protégé of W. E. B. Du Bois. Little did I realize that the denomination in which Wright served for several decades would become my focus for serious scholarly study and writing. Later, I became aware of Wright’s impressive stature as an intellectual and pioneering black sociologist who had earned the Ph.D. in 1911 from the University of Pennsylvania. His father and namesake had recruited Du Bois to Atlanta University and the younger Wright consciously followed in the Du Bois’ footsteps as a sociologist and studying in Germany. Wright and historian Charles H. Wesley, a Harvard Ph.D., colleague to Carter G. Woodson, and author of seminal studies in African American history including a biography of Richard Allen, were leaders in the AME Church and were respected scholars. Wesley, whom I met in 1970 while I was an undergraduate, like Wright, awakened me to the crucial intersection between African Methodism and scholarship about the black experience. I aspired to emulate them as scholars who understood the black religious experience.

My scholarly reflections on the AME past, though an integral part of my family background as it was with Wright and Wesley, drew principally from my Ph.D. training at Washington University and teaching American and African American history at Williams College and Vanderbilt University. Hence, abolitionism and the Civil War and Reconstruction eras in the 19th century and the two world wars, the Depression, and transatlantic black freedom struggles in the 20th century as much as any AME institutional developments influenced how I conceptualized and chronicled the history of this major religious body. Though Du Bois in 1903 described the denomination as “the greatest Negro organization in the world,” I determined that narrating this proud ecclesia should not avoid any semblance of hagiography or any tone of triumphalism. Rather, the history of the African Methodist Episcopal Church should be written through an engagement with “cutting edge” scholarship in relevant fields. Atlantic World perspectives, for example, have transformed African American history in the period of AME origin in the 18th century. Because the denomination’s chronology and geography spanned the Americas, Africa, and Europe, the AME past can be envisaged as much as an Atlantic project as singularly African American.  As an institution whose development lay in its reckonings with slavery, segregation, and colonialism, the resilience of its emancipationist ethos across time and territory emerged as a salient theme. Far from being a conventional chronicle of a black religious institution, the book is an incisive analysis about how enslaved, emancipated, and colonized peoples established and harnessed an institutional body of impressive longevity to movements aimed at realizing insurgent freedom objectives.

But, the tensions between institutional governance, itself a liberationist project, and involvements in frontline insurgencies against racial oppression, presented perennial challenges to ministers and members. At times, attention to denominational affairs superceded the church’s emancipationist ethos. This increasingly meant that the denominational hierarchy became immersed in the church’s internal business while rank and file clergy and the laity emerged as the principal carriers of the AME freedom legacy. Whether it was Denmark Vesey, who planned a slave insurrection in 1822 or A. Philip Randolph, the labor organizer who threatened a March on Washington in 1941 to ban race-based employment discrimination in wartime industries, they more than high church officials plunged African Methodism into insurgent initiatives aimed at upending racial hegemony.

Beyond these adherents who operationalized the denomination’s emancipationist ethos were thinkers and anti-colonialists, who, though formally unaffiliated, drew intellectual sustenance and insurgent energy from their AME heritage. Samuel W. Allen, a mentee of Richards Wright and the novelist’s designated fill-in to edit PRESENCE AFRICAINE, brought African American perspectives to the Paris-based Negritude movement. Allen, the son of an AME bishop whom I interviewed and with whom I had extensive communications, embedded in his poetry undertones from his long intergenerational lineage in African Methodism. Similarly, David Levering Lewis, the Pulitzer Prize winning biographer of W. E. B. Du Bois, drew his pedigree from his father, the dean and a two-time president respectively of an AME seminary and college. This denominational heredity informed the start of his academic career in newly independent Ghana and his landmark studies about the black experience as a scholar at several American universities.

These scholarly influences, beginning with my early exposure to Richard R. Wright, Jr., facilitated my pursuit of scholarship about the African Methodist Episcopal Church. In 2010 I published AFRICAN AMERICAN PREACHERS AND POLITICS: THE CAREYS OF CHICAGO, a dual biography of the two Archibald J. Careys, respectively the father, a bishop, and the son, a pastor and attorney based in the Windy City during most of the 20th century. Both AME clergy were preeminent in municipal and national politics as practitioners of public theology, the idea that ministry pertained to both church and community. Their involvements exemplified the role of AME clergy and laity in freedom initiatives aimed at blacks throughout the diaspora. This monograph on the Careys articulated themes that are amplified in my larger study, THE AFRICAN METHODIST EPISCOPAL CHURCH: A HISTORY. My scholarship, grounded in wide-ranging primary and secondary sources, reflected intellectual influences from scholars who also reckoned with the history of African Methodism. 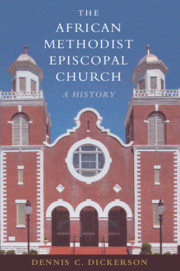 About the Author: Dennis C Dickerson

Dennis Dickerson is James M. Lawson, Jr Professor of History at Vanderbilt University, Tennessee. A scholar of American labor history, the American civil rights movement, and African American religious history, he has received grants and fellowships from the American Academy in Berlin, the National Endowment for the Humanities, and the American Cou...