Sing to Me Muse…

Where do the Iliad and Odyssey come from? The story of these ancient epic poems is a “complicated” one (to borrow Emily Wilson’s inspired translation of the Homeric epithet polytropos, a word that defines both the Odyssey and its cunning hero, Odysseus). The Greeks from the Classical period thought of Homer as a grizzled blind bard from the island of Chios, a notion that survives in the portraits of the poet we see in today’s museums. But if we go further back in time–into the Bronze Age–we already find a singer (depicted on the walls of the palace at Pylos and on the cover of our book) who looks very much like the Homer of the Classical imagination. The singer from Pylos also resembles the blind bards described in the Odyssey: Phemios, who sings in the palace of Odysseus; and Demodokos, who entertains the royal family of the Phaiakians with songs of the Trojan War. We now know that Homeric poetry was not composed–and much less written down–by a single individual. Rather, the poems represent the culmination of an oral art that evolved over hundreds of years. So we can think of “Homer” as a name for a specific poetic tradition rather than the name of an individual. This epic tradition preserves the memory of great heroes and events of the past: Achilles and his rage towards the end of the Trojan War; and Odysseus’ ten-year long search for his home and his reunion with his wife Penelope.

At some point around the 8th century B.C., the poems started to crystallize–and eventually were written down–in the form we have now, and in turn, became a new starting point for the Western literary tradition. No other works have been more influential over such an extended period of time and cutting across so many linguistic and cultural boundaries. The Iliad and Odyssey are unique in being at once so ancient and foreign while also staying essential to our modern understanding of ourselves. From Virgil’s Aeneid to Alice Oswald’s Memorial, Homeric epic has been a source of inspiration for countless artists, and new translations revive the poems for each generation. It is in fact impossible to think about war or identity in the modern Western world without in some way thinking about Homeric poetry and its legacy.

In a series of thematic essays, The Cambridge Guide to Homer trace the many routes taken by Homeric epic in the ancient world and its continuing relevance through different periods and places. The work is divided into three sections: 1) Homeric Song and Text (associate editor, Casey Dué), which treats the composition of the poems and their evolution into texts; 2) Homeric World (associate editor, Susan Lupack), which looks at the material culture depicted in the poems and its relation to the archaeological record; and 3) Homer in the World (associate editor, Robert Lamberton), which focuses on the receptions of the Iliad and Odyssey from antiquity to the present. Drawing on anthropology, philology, linguistics, history, archaeology, cultural and literary studies, the Cambridge Guide to Homer presents and synthesizes the finest Homeric research available today. Each section starts with a series of “macro” essays arranged thematically that are accompanied by shorter complementary “micro” articles arranged in alphabetical order. The macro essays provide broader, synthetic overviews, while the micro essays explore more narrowly defined subjects.

The Cambridge Guide to Homer is the first reference work on Homer to present the information in a structured manner that allows the reader to gain an understanding not only of the variety of topics relating to Homeric epic, but of the myriad connections between different strands of Homeric studies. The structure of the work reflects the Homeric tradition itself: it is open-ended and fluid, encompassing an encyclopedic variety of topics and disciplines. Readers can choose any of the essays as their point of entry, and follow through different themes according to their interests. We hope you enjoy your own odyssey through this up-to-date collection of research on Homer and his worlds. 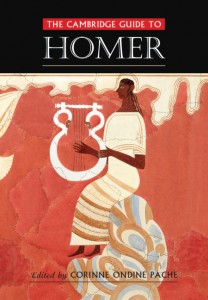 The Cambridge Guide to Homer by Corinne Ondine Pache

About the Author: Corinne Ondine Pache

Corinne Ondine Pache is Professor of Classical Studies at Trinity University. Her research focuses on ancient religion, archaic poetry, and the modern reception of ancient epic. Her publications includes Baby and Child Heroes in Ancient Greece (2004) and 'A Moment's Ornament': The Poetics of Nympholepsy in Ancient Greece (2011)....

About the Author: Casey Due

About the Author: Susan Lupack

About the Author: Robert Lamberton