When I was writing Sexual Freedom in Restoration Literature, a book primarily about two writers, the Earl of Rochester and Aphra Behn, back in the 1990s, the opening sentence of the jacket blurb read: ‘The pursuit of sexual freedom and its political, philosophical and practical implications are the themes of this wide-ranging study of seventeenth-century literature, which confronts ideological issues of sexual politics equally relevant to modern debate’. At that time I didn’t anticipate the Me Too movement, Harvey Weinstein, or a President of the US who is a misogynist and narcissist, bragging about his sexual prowess while threatening to blow up the world.

The issues I raise in the book, as several reviewers noted, involve the paradoxical and unstable relationship between sex and power, ways in which sexual relations could serve as ‘a microcosm of, or metaphor for, political relations’. The society anatomized in the works of Rochester and Behn, as I said in the Introduction, ‘places a pre-eminent emphasis on competition, presupposing a zero-sum game. In every transaction, the assertion of freedom by one participant means the deprivation of freedom for another; in a world where betrayal is the norm, the sex act itself becomes predatory’ (p. 4). These words seem uncannily prophetic in 2020. What seemed to me then and still does now as particularly striking about Rochester and Behn is their ambivalence toward the society which formed them and toward which they were deeply critical: my original working title for the book was ‘The Rebel in Your Arms’, quoting a line from a Rochester poem that expressed conflicting desires, held in suspension.

What keeps the poems of Rochester and the plays, poems, and novels of Behn alive today is the power and psychological insight with which they treat the conflicting claims of freedom and authority, rebelliousness and security, the assertion of power and the need for love. These themes are evident in each of the chapter headings:

Introduction: the imperfect enjoyment
1. Hobbes and the libertines
2. The tyranny of desire: sex and politics in Rochester
3. Absent from thee
4. Playing trick for trick: domestic rebellion and the female libertine
5. My masculine part: Aphra Behn and the androgynous imagination. 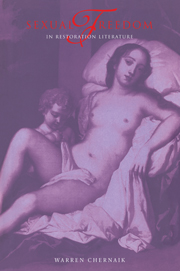