New York: A Literary History is the result of a lifetime of reading books about the city and reading authors who made the city their home. From Stephen Crane, James Baldwin, Susan Sontag, and Zora Neale Hurston, I was always moved by the authors and artists who use the metropolis as a scene to set their drama, or, as a place where their ideas and opinions could find a voice. It was in these accounts that I first saw the city. Before I even set foot in the metropolis, I knew Broadway, Brooklyn, Harlem, and the Lower East Side from the novels and poems that explored the city streets. In all its glories and its failures, this is how all the world first sees New York.

The study of the city in this volume explores these issues as a group of international scholars examine how New York has been represented through literature from its earliest history to the present day. The pioneering research in this collection addresses issues such as homelessness, childhood, health, and gentrification across the centuries. It pursues the way in which economics and politics are shaped in this global city. But it also reveals the intimate life in New York, as Italian, Arabic, Chinese, and Jewish writers speak of their progress and adjustment within the city. This is truly the way of life in the metropolis, a constant, jarring experience which forces the individual to oscillate between isolation and alienation, whilst being overwhelmed by the opportunities of community and connection.

To write a definitive history of the city’s literature is an impossible task. New York has been home to so many authors and witnessed the publication and circulation of innumerable texts. Instead, what is offered in this volume is a guide to how we can view the city’s literature differently. Instead of organising these ideas chronologically – imposing an arbitrary assessment of order on what is sometimes chaotic, divisive, and troublesome – this collection is detailed into four sections that attempt to reveal the character of this literature, its meaning and its purpose for its writers and its audience. The contributors in this volume are spread through the themes of Adaptation and Adjustment, Innovation and Inspiration, Identity and Place, and Tragedy and Hope. It is in this structure that the collection asks its readers to think in new ways about literary connections and what it means to study urban literature.

In a sense, New York’s literature is ‘world literature’ as it speaks to and attends the ways in which the modern world emerged. The city’s literature possesses a universal quality as it serves to remind readers of the forces that shaped our lives and our identities wherever we are in the world. 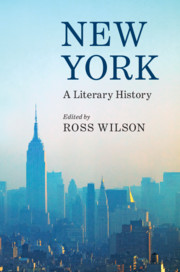 About the Author: Ross Wilson

Ross Wilson is Director of Liberal Arts at the University of Nottingham. He studies the modern history, heritage and memory of New York with a specific concern for how people form a sense of place within the city in the past and in the present. His work includes New York and the First World War: Shaping an American City (2015)....